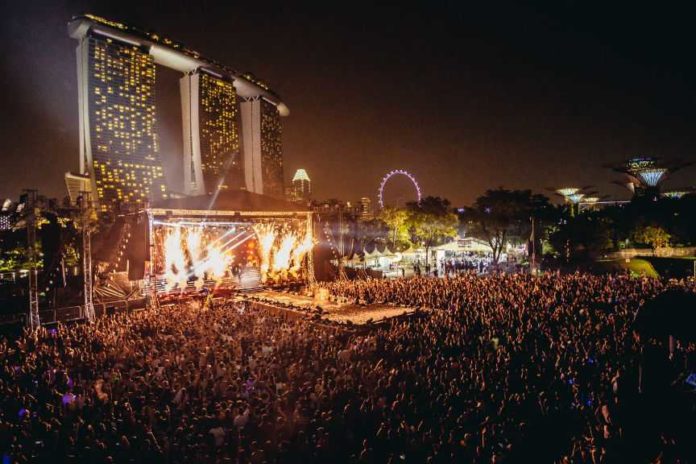 Grammy-nominated Dutch DJ/producer Armin van Buuren was in Singapore this week to wrap up the Asian leg before heading to Buenos Aires for the last night of Armin Only Embrace World Tour! The 5-hour theatrical affair took place at The Meadow, Gardens By The Bay, on 1st April. 7,500 revellers were present to witness the one-night spectacle that lasted for 5 hours. Music was not the only element that was the highlight of the evening; the location chosen was perfect and amplified the whole experience. The Meadow has a stunning panoramic view of the Supertrees and Singapore’s downtown cityscape. Hat’s off to the organisers – The Livescape Group, The Multiply & ALDA events for the seamless planning and execution. Armin Only Embrace, not only had a solo set by the trance legend Armin van Buuren, but also included live performances of global artists such as Mr.Probz, Kensington, Eric Vloeimans, Cimo Fränkel, Betsie Larkin, Angel Taylor and BullySongs. The live show began at 7 pm when jazz trumpeter Eric Vloeimans took over the stage with his solo blowing over rising tempos against the beautiful backdrop of confetti, pyros, laser lights, a cast of dancers and guest vocalists and musicians. 5 time world #1 DJ, Armin embraced the different styles and genres of music by collaborating with the various international artists, reflecting his expanding musical tastes. To end the night Armin returned to his roots for his trademark vinyl set, a key moment for old school Armin fans. It was a magical night indeed at Singapore.