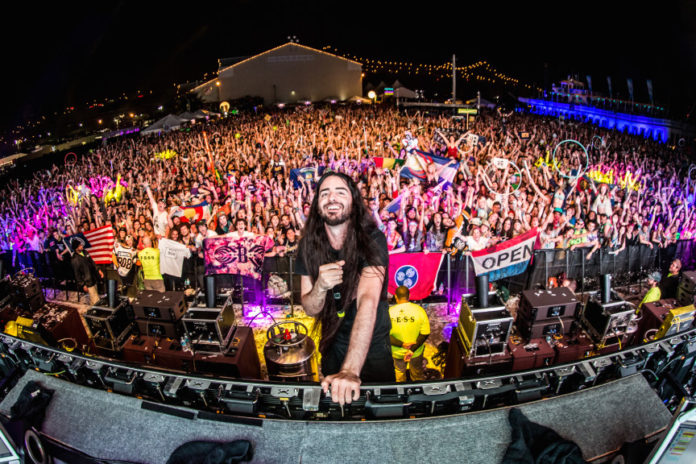 This past Monday, Lorin Ashton, better known as Bassnectar released a 16 track album entitled “Into The Sun”, on his own Amorphous Music imprint. The album was originally a mixtape concept. In an interview with Rolling Stone Magazine, he stated that “[Mixtapes] are a fun playground for me because there are no rules….”. From what I have heard, he has definitely experimented a little, opting for an overall darker sounding album.

The beginning of the album begins with downtempo, chilled vibes incorporating elements of glitch, world music, trance and hip hop which mesmerize the listener into euphoria. A soothing melody fills your ears, followed by gentle airy voices, carry along whilst “Chasing Heaven”, courtesy of a stunning collab with Levitate.

At the next stop, your ears are enchanted by the familiar but soulful voice of Alisa Xayalith. Bassnectar manages to retain the essence of “The Naked and The Famous'” original song whilst adding his own spin. A much heavier rendition, but still uplifting. The title track builds up the energy going into the next part of the journey.

“Speakerbox” is a more upbeat trappy tune which features Lafa Taylor. “Sidewayz” is another trap tune with plenty of bass for your speakerbox, these two would definitely bring the house down at festivals. After the laid back start to the album, the pace is quickened. Liquid dubstep saturate your eardrums, increasing your heart palpitations. Chiptune tones and singing robots enchant the scene in “The Mystery Spot” and “Rose Coloured Bass”.

The second half of the album is where the heavy bass drops reside. More of a brostep and drum & bass edge can be heard, plenty of low end, glitchy delicious distortions to create mayhem on the dance floor. Among my favourites is “Generate” which Bassnectar teamed up with Gnar Gnar to create.

Bassnectar included five old tracks on this album, but revamped, polished and let loose in the modern dance music era. These tunes are more experimental in their sound, consisting of various genres from industrial, chiptune, glitch, world music, hip hop, dubstep etc. An interesting array of music put together to form an album that is eclectic, creative and one that takes us on an epic journey. A definite must-have for your summer music collection. Make sure to get your copy here.