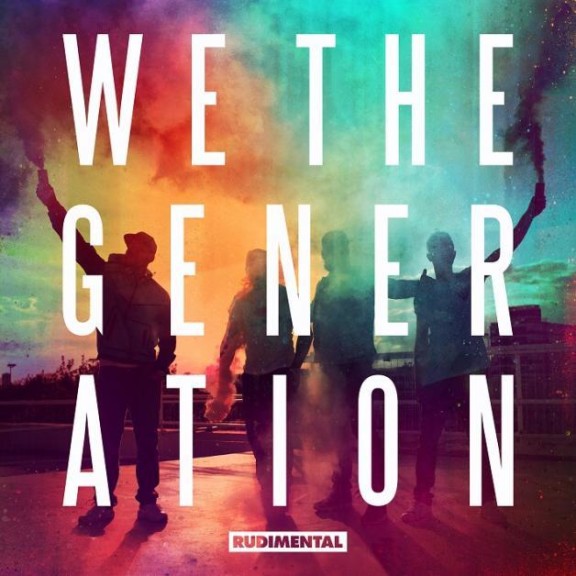 Rudimental are back with their sophomore album entitled “We The Generation”, the follow-up to “Home”.

The album was released on 2nd October. Its no surprise that the four member British group have a winning formula when it comes to mainstream music writing success. Taking drum and bass music to new horizons in the process creating new fanbases to the genre worldwide. “We The Generation” overall is a radio friendly album, with a couple of festival headlining tracks, but nothing too amazing. The guest vocalists are not so varied in styles, however includes a few upcoming artists. The album isn’t better or worse than their previous “Home” album, it sort of remains the same, with the same formula. I’m not too impressed, but let’s take a deeper look at each track.

The opening track “I will for love” features soul and jazz singer Will Heard. This first track already tells you that the songs to follow through will pretty much sound similar. Nothing fancy about this song, break beats with hints of guitars, reese, a church choir, some brass.

Moving onto the 2nd song, “Never Let You Go” featuring Foy Vance. Another pop drum and bass vibe. Upbeat and happy, although the bassline and trumpets stand out.

The title song is up next, featuring the soulful voice of Mahalia. This song breaks away from drum and bass. Abit more funky with trumpets and horns in the background. I somehow expected more from the title track, something that makes a statement, claiming that “We’re the generation and we’ve had enough”. I didn’t feel like that message was believable from the song structure or the vocalist.

“Love Aint Just A Word” features Anne-Marie and Dizzee Rascal. The song starts of with a reggae melodies and instrumentals with Anne-Marie’s vocals. Chilled but about a minute in and the vibe flips on its head and we’re hit with reese and breaks. Slightly edgy, just a hint. Dizzee Rascal is always impressive, his lyrics are on point.

Bringing us to “Rumour Mill” featuring Anne-Marie once again and Will Heard. Another track that breaks away from the drum and bass. The pace is slowed into a deep house influenced tune. Chilled vibe, definitely a summer tune.

“Common Emotion” follows through with the deep house vibe. Although this song contains elements of neuro funk. This track features the velvety vocals of MNEK. He is the focal point of the track, impressive.

Halfway point of the album is “Spread Love”, yet another song that features Will Heard. A typical pop song, enough said.

Next up is “Foreign World” featuring Anne-Marie. Another pop song hit. I really have nothing much to say about this song.

“Too Cool” is next, featuring Ella Eyre. Back to the pop drum and bass vibe. More horns and trumpets.

“Bloodstream” is the 9th track. It seems to be a rework collaboration of Ed Sheeran’s song from his 2014 “X” album. Strong lyrics and banging drums with guitar string melodies for that added emotion equals a winning formula.

“All That Love” is the 10th track, another collab with Anne-Marie. Piano notes and drum and bass, beautiful combination.

Second last is “Lay It All On Me” featuring once again Ed Sheeran. Just another pop song.

Lastly is “New Day” featuring the vocals of the late Bobby Womack. Its somewhat of a cameo song, one of the last songs the R&B legend recorded before his death. This is a great song to end of the album, mixing together the old with the new.

“We The Generation” failed to impress me but its not a bad album if you’re into pop music. I’d listen to this in my car and sing along. This album definitely inspires awesome remixes, I’ll be looking out for those instead. Don’t take my word for it though, have a listen and give us feedback about what you think. Get your copy here.