Fusing together a rare blend progressive house, techno, and electro, Julian Gray carves out his own groundbreaking genre his fans have deemed as “progresso.”

His one of a kind style of silly, playful, and melancholic music personally captured Deadmau5’s attention early in his career eventually leading to several releases with the artist’s esteemed mau5trap label. His thoughtful and introspective music delivers a much-needed departure from today’s electronic music landscape.

Publicly supported by heavyweights such as deadmau5, Above and Beyond, Cosmic Gate, Solarstone, Thrill Seekers, and Chicane, Julian’s music is commonly played on the likes of BBC Radio, mau5trap radio on Sirius XM, and Armin van Buuren’s A State of Trance.

With collaborations alongside artists such as KJ Sawka (Pendulum) and Mr. Bill, in addition to five EP releases to date, he is undoubtedly one of the fastest rising producers of his generation. Hosting his mix on T.H.E – Podcasts, Julian Cray delivers a fantastic progressive house mix, which is sure to give you vibes that you get from listening to Eric Prydz or deadmau5!

Don’t believe us? Give it a shot.

Mix Of The Week: Joël Fabrice 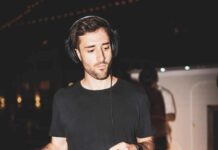 Mix Of The Week: Griffin Hanekamp

Mix Of The Week: Blazers