Manchester-based electronic music DJ/Producer NASH has been on a roll.

His debut single ‘GODS’, a collaboration with Ashley Wallbridge, reached no.8 in the trance top 100 beatport.com chart at the end of 2018. Quickly following on from this, his new release ‘MOMENTUM’ launched to no.3 in the trance chart and no.88 for all genres.

Currently signed to Garuda / Armada, NASH’s music has been featured on stages such as A State Of Trance, Armin Van Buuren’s EDC Vlog and has been played out by heavyweight DJs such as Gareth Emery and Omnia. NASH is also a busy composer, with numerous songs featured on primetime BBC1 TV shows and more recently the new Formula E soundtrack.

With more releases already inked and live shows booked for across the UK and beyond, 2019 is set to be a very exciting year.

Further proof of this exists in this uplifting guestmix, as NASH puts his favourite trance sounds at the moment, in a blistering guestmix. Look out for music by FUTURE CODE, Ashley Wallbridge, Standerwick, and loads more as NASH provides the next installment of #THEPodcasts.

Don’t forget to share your feedback on social media by using #THEPodcasts. 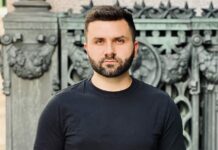 Mix Of The Week: Michael Anthony