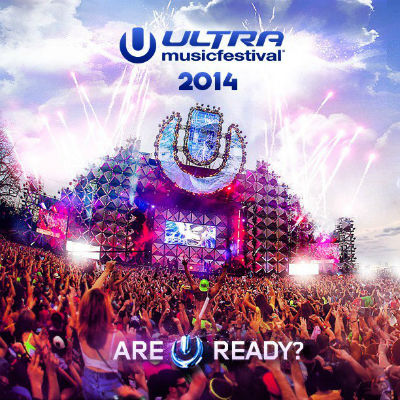 It’s a well known fact that albums are back in vogue, with almost every big artist working on one. This year’s edition of UMF will see previews of tracks from the upcoming albums by Hardwell, Afrojack, Nicky Romero and David Guetta – all set to blast their tunes on the huge mainstage. 2013 saw some young talent rising and some other talented DJ’s having a breakthrough year with some great productions. Ultra 2014 will see some performers making their debut, most notably Andrew Rayel, DJ Snake, Dannic and wonderkid Martin Garrix on the mainstage for the first time. When Ultra Music Festival rolled through Miami for six days last year, Martin Garrix was only found on site hanging out with friends and soaking everything in from an admirer’s point of view. He also had yet to release “Animals.” So almost 365 days and uncountable airplays later, Garrix is primed to see the festival from another point of view. Slotted for an early evening set, Garrix will set sights upon a crowd larger than he’s ever seen before. His Ultra debut will be a landmark hour for the young producer, and the opportunity to gain more of a following as the attention is his for the taking. As ever, trance fans have been keeping a keen eye out for the announcement of Armin van Buuren’s next A State Of Trance world tour. The big reveal came on the latest broadcast of ASOT radio. Starting in the early days of 2014, ‘ASOT 650: New Horizons’ will visit a string of cities, and Miami is locked in for Sunday 30 March ! Only Coachella probably can boast of a wider variety in music styles, as Ultra this year has something to offer for everybody. From big room to trance to underground and pop, Ultra this year is all about spreading good music, whatever be the genre. Ultra has a crazy lineup of live performers this year, right from M.I.A to Chance The Rapper and psych-rock boys MGMT. Also not to be missed are 2many Dj’s, Basement Jaxx and Australian electro-rock group Empire of The Sun. The live performers lineup is explosive and full of super talented musicians. There’s no way anybody would want to miss this! Eric Prydz is celebrating 10 years of Pryda this year, and the supremely talented man behind hits like “Layers” and “Every Day” is unveiling a brand new stage show at this year’s Ultra mainstage, and it is set to take Miami by storm! What happens when two of the world’s foremost producers unite? They form a superduo so awesome that they had to wait until the Ultra Music Festival to make their big stage debut. Jack U is the collaboration between Skrillex and Diplo which was first announced back in April when Diplo tweeted ‘”Jack u… Means skrillex+diplo together..”. The duo unveiled some tracks during Mad Decent Block Party in San Diego last September but the Ultra Music Festival will mark their first big appearance together. Expect this to be massive as the pair take to the Main stage on Sunday. 8. A fist pump for massive Mainstage!

This year’s Main Stage is more than just a heavily packed lineup, it’s a calculated presentation to marvel at. As always, Ultra Music Festival is bringing some of the biggest names in the dance scene to headline its arena main stage. On Friday Eric Prydz will present Halo which looks likely to top even his amazing 2013 hologram shows. There’s also Kaskade and Tiesto performing, not to mention producer supreme Diplo. Saturday sees the big names keep on coming with Arman van Helden, Above and Beyond and Alesso all making sure the dancing continues well into the night. The final day sees that the party will definitely not wind down as there’s Sander van Doorn, AfroJACK, Steve Angello and David Guetta all taking the stage. Hardwell’s set last March made for a whirlwind of buzz and was heard around the world and understood to be the weekend’s best — by those in attendance and to those not. Where he left an explosion, Hardwell will return to claim his throne — single handedly closing out Ultra Music Festival until 2015. It was certainly nothing short of an epic first year for Underground Story, with some of the global underground’s biggest names gracing the DJ booth. So even if the promoters remain wary of the challenges facing them as they continue running against the tide of commercial nightlife on South Beach, ongoing success must surely be in the cards if their 2014 artist bookings are anything like last year’s. W&W came close to claiming a piece of Miami real estate last year when they packed out Armin van Buuren’s ASOT arena greater than all but Armin himself. Nearly one year later, that comes as no surprise — the duo is perhaps the most in-demand festival act this year, appealing to the largest pool of fans with trance, progressive, and big room styles all blended under the W&W flag. They’ve earned headliner status, but only at Ultra do they filter into the category as a hidden gem. Wildcard is not a word often, or ever, associated with W&W, but on Saturday of Ultra, with a Main Stage free-for-all, they’ve become just that — and that’s an attendee’s dream. What this offers is a bargain in the process of making difficult decisions on who to see and who to skip. Fans can get the peak hour Main Stage experience without sacrificing the remaining primetime selections. When trance legends Ferry Corsten and Markus Schulz announced last year that they would be linking up to create a “dream team” group, half the dance world went into a collective apoplexy. Promising to bring a “harder, driving and more aggressive” sound and a “tighter and more dynamic” live show, the duo are set to perform in a prime-time spot at Armin van Buuren’s ASOT 650. Expect explosive energy, touching moments, and a wicked combination of Markus’ hard-hitting trance and Ferry’s softer, more melodic compositions. As ever, Ultra favourite Carl Cox will return to the Ultra Megastructure once again, where the lord of techno will celebrate the 10th anniversary of his legendary CARL COX & FRIENDS ARENA. The now legendary Carl Cox Stage will this year feature an international array of DJs including Britian’s Pete Tong, Germany’s Loco Dice, Switzerland’s Luciano and Italy’s Marco Carola.

In it’s 16th year, the Ultra festival is now one of preeminent EDM showcases in America. Since 2005, it’s grown almost 750% from attendance of 45,000 in 2005. In addition to the Miami flagship, Ultra runs in 10 international cities, ranging from Ibiza, Spain to Tokyo, Japan. In 2014, Ultra also made its debut on the African continent with an inaugural 2-day event in Cape Town and Johannesburg on February 14th and 15th. According to the Miami New Times, the economic impact of the festival on the local economy last year was $79 million, which means that this year Ultra will be responsible for generating over $200 million in three days. For all the set timings and more information, visit the official website of Ultra Music Festival.