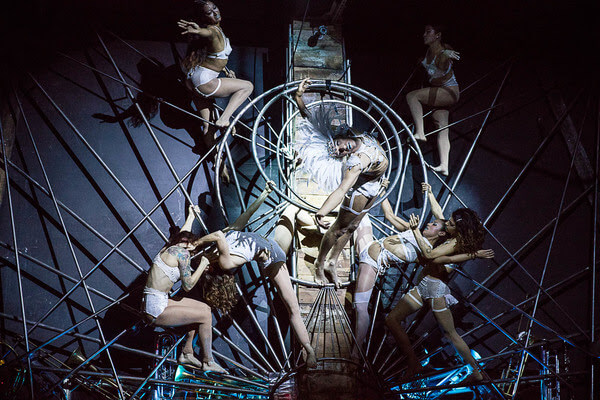 House of Yes, the unique and ultra stimulating performance art space that takes going out and entertainment to the next level, kicks off Memorial Day Weekend this Friday night with an incredible four day event lineup.

Described by The New York Times as the New Yorker’s answer “for those raised on the clubs of the 70’s, 80’s and even 90’s,” highlights of the weekend include their Sunday night Summer Sessions dance party with Sander Kleinenberg and the inaugural YES Memorial Day BBQ Pig Roast. Show your love for America by eating copious amounts of meat and then dance it off all day. No cover, just meat & music.

Escape the everyday into this radically beautiful and inspiring venue that puts emphasis on nightlife beyond just DJs. Having just re-opened in its best digs to date by Bushwick’s trendy Jefferson stop at the start of 2016, House of Yes is widely known for its eclectic range of performances that range from aerial, cabaret, circus, fire breathing and theatre art to hosting world renowned DJs on an impeccable sound system with 3D projection mapping and state-of-the-art visuals. The quirky performance space that also includes a full service bar, restaurant and outdoor lounge with uniquely designed bedazzled bathrooms (one even has an aquarium) has quickly become a prominent stop on the underground Brooklyn nightlife scene, making it a must for all your nightlife needs this long weekend.

Friday, May 27 – The Party by OSTBAHNHOF // Radical Dance Party

The Party by Ostbahnof will once again bring their international party series to House of Yes later on this Friday night, invoking the outrageous art and party scene of Berlin’s nightlife. With proceeds going to the Princess Janae Place, a community organization in the Bronx that creates a safer space for trans and gender nonconforming individuals to find housing and support in the local community. The Party by Ostbahnof invites you to come and be yourself at this awesome queer dance party. With a lineup that includes Wrecked, San Francisco’s David Sylvester going back to back with SPRRKLBB and Brooklyn’s very own Amber Valentine, this party will seamlessly bridge the gap between house, techno and trash pop.

Early Saturday night, Wasabassco’s House of Deveraux presents BORDELLO Burlesque Show bringing snippets of the Wild Wild West to Bushwick. The evening will be hosted by sheriff Syndi Deveraux and her flexible deputy Amanda Whip promising an evening of raunchy cowboy and can can entertainment.

Saturday, May 28 – THANK YOU for EVERYTHING! Dance Candy Spectacular (free before 11pm) | Doors at 9pm

Later on, House of Yes are proud to welcome back their favorite monthly dance party, THANK YOU for EVERYTHING! (free before 11pm). Costumes are encouraged – think colorful candy, glitter glam and big bad and beautiful. DJs in the main room include Bit Funk, Sammy Bananas and David Kiss, with Mike Swells and Seph in the front room. With live performances that include go go dancers, aerialists and funky soulful house grooves, this Saturday night party extravaganza is not to be missed.

Sunday, May 29 – Summer Sessions with Sander Kleinenberg // A Dance Party

On Memorial Day Eve, House of Yes will host Amsterdam’s Sander Kleinenberg, a DJ and producer who has been at the forefront of electronic music for over 25 years. Mixing disco, Detroit techno, soul and straight up funk, Sander Kleinenberg has remixed tracks for the likes of pop and dance icons Justin Timberlake, Madonna and Daft Punk. Coming off the release of his recent The Deepest Mixtape in the Universe #5 (Miami Edition), Sander Kleinenberg will showcase his progressive and twisting sounds with support by Saint Glock (US), and house music favorite George Faya, known for his deep house beats at Willkommen Deep House Yoga.

Recover from the previous night’s antics with Saturday Disco Brunch! And Sunday Jazz Brunch! kicking off from 11am to 4pm on Saturday and 12:30 to 2:30pm on Sunday every weekend at House of Yes. The team will be serving up boozy cocktails and special dishes such as their signature Middle Eastern Breakfast accompanied by cruisy jazz and disco tunes. Afterwards take a peek at Eric Schmalenberger’s QUESTION: Pop Up Market running from 11am to 5pm Saturday, May 28th and Sunday, May 29th where you can pick up vintage and luxury finds at amazing prices and quirky queer pieces by local independent designers.

Memorial Day afternoon sees House of Yes debut their Pig Roast + Dance Party. Featuring the musical talents of local NY techno and deep house favorites Tunico (Flash Factory), Bonzai (Komfort Xone) and House of Yes resident Saint Glock, the 12 hour BBQ and dance party promises to be the perfect answer to your Memorial Day party celebrations. Starting at 8pm and to close out the extravaganza, the Might Get Weird crew joins in for their official afterparty celebrating their five year anniversary and final party. No cover.

House Of Yes – Thank you for everything from Michael Tosner on Vimeo.