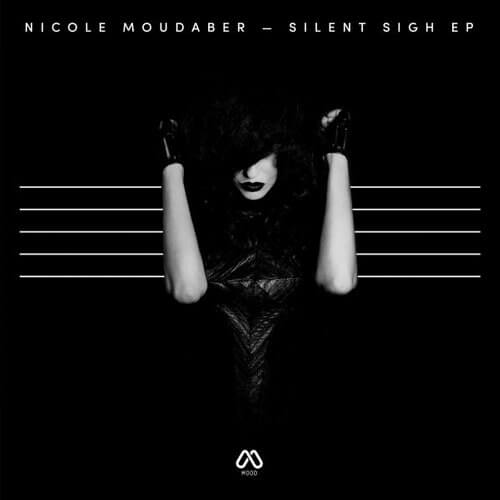 Nicole Moudaber has had a full throttle start to 2016; ringing in NYE at Heart Nightclub in Miami, an open to close set at Stereo Montreal then flying south of the border playing two shows during the music industry’s pinnacle winter event, The BPM Festival in Playa del Carmen, Mexico.

“Silent Sigh” kicks off the EP with an unhurried build, filled with Nicole’s characteristically dusty textures wrapping around stoic kicks. Stark, metallic designs echo in and out, before an even darker, sub-laden kick pressure pushes the track into a powerful climax. “Move A Little Closer” displays Nicole’s skill for utilising vocals to forge a sense of intimacy and atmosphere without letting up on either pace or power. A thudding bassline and hi-hats underpin the track’s whispering, seductive samples, whilst gradual ice blast pads add depth to the production. A long-player at 10 minutes, the “Move A Little Closer” layers of build-up pay off with a mind-bending, extended breakdown of space age synths.

Closing the EP is “More Ways Than One”, with a dose of undiluted techno at its best. Deep and dark, “More Ways Than One” shows Nicole’s skill for arranging her productions so that every detail has maximum effect. Initially released as a free download to show Nicole’s appreciation for everyone who supported her throughout 2015.

There’s no limits for Nicole’s 2016 horizon. This February she’ll be playing the US debut of Awakenings NYC at Hammerstein Ballroom on Valentine’s Day back-to-back with Victor Calderone, in addition to North American tour stops at Shrine in Connecticut, Philly’s Rumor, Story in Miami and returning to Mexico for Insomniac’s EDC Mexico. Stay tuned for more information as Nicole will bring her annual MoodDAY and MoodNIGHT events to Miami Music Week 2016! Fans can rejoice as the techno connoisseur makes her awaited return to Coachella Valley Music and Arts Festival where Nicole will perform with Skin of Skunk Anansie both weekends in the desert. Nicole and Skin released their acclaimed collaborative ‘BREED’ EP in fall 2015.

EDM News Melody Siganporia - September 26, 2022 0
After previously turning down offers, Rihanna will be taking the spotlight at the 57th Super Bowl Halftime show in her big comeback to the...
ABOUT US
What started as an interest, slowly turned into a passion, and before we knew it, we had curated and founded a thriving community of avid electronic dance music lovers.
FOLLOW US
© Copyright 2022 - T.H.E Music Essentials