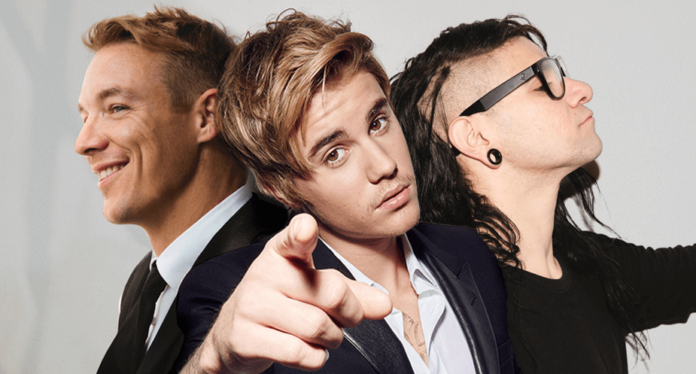 We’re one day away from the Grammys and photos of Jack Ü’s performance rehearsal have leaked and we don’t see any CDJs!

Skrillex & Diplo have planned to go all out with their Grammy performance tomorrow and its not something you’d generally see in a DJ’s performance. Pictures from the duo’s performance rehearsal with Justin Bieber were released earlier and we gotta say, we’re impressed.

Well to start off there isn’t a CDJ in sight so we can be sure there won’t be any ‘push play’ jokes. Next up the Biebs and Skrillex can be seen practicing on their guitars while a 3-piece string ensemble, a keyboard and live drums play on in the background. Diplo’s there too just in case you thought we forgot him along with a giant Ü logo on top.
Check out the pics: Skrillex, Diplo and Justin Bieber’s collaborative “Where Are Ü Now” is up for Best Dance Recording this year. Do you think they’ll win?