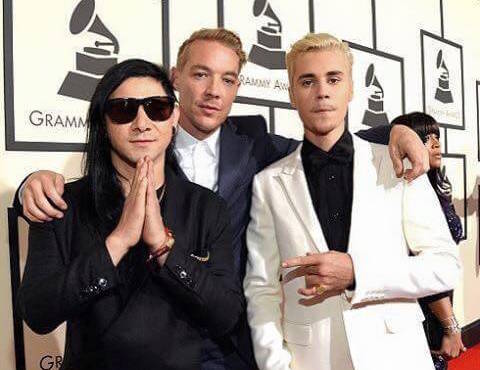 Skrillex & Diplo just won 2 Grammys for their hit track ‘Where Are Ü Now’ featuring Justin Bieber as well as performed an amazing live rendition of the track, and we couldn’t be happier!

Skrillex & Diplo broke records by winning the Grammy for both ‘Best Dance Recording’ & ‘Best Dance/Electronic Album’. Not only did they help Justin Bieber get his very first Grammy award, but Skrillex is now the most successful electronic act at the Grammys with eight awards, after breaking Daft Punk’s and his previous joint record of six.

The duo beat the likes of Above & Beyond, Galantis, Flying Lotus, The Chemical Brothers and Disclosure to win both the above mentioned awards. Though Diplo did not win the coveted ‘Producer Of The Year’ award which he was eyeing, he was thrilled to win his Grammys nonetheless. Here’s the duo’s acceptance speech.

Skrillex, Diplo and Justin were also scheduled to perform at the Grammys and boy was that a treat. We’ve now got a live version of ‘Where Are Ü Now’ with Skrillex on the guitar!

Justin Bieber – Love Yourself / Where Are You… by angelto_23

Here’s a clearer, only audio version:

In other EDM related Grammy news, Dave Audé won the Grammy for ‘Best Remixed Recording (Non Classical)’ for his remix of Mark Ronson & Bruno Mars’ Uptown Funk. Dave beat out the likes of Kaskade and RAC to win the coveted prize. Check out the remix below:

This brings an end to The 58th Annual Grammy Awards! Check out the full list of winners here.