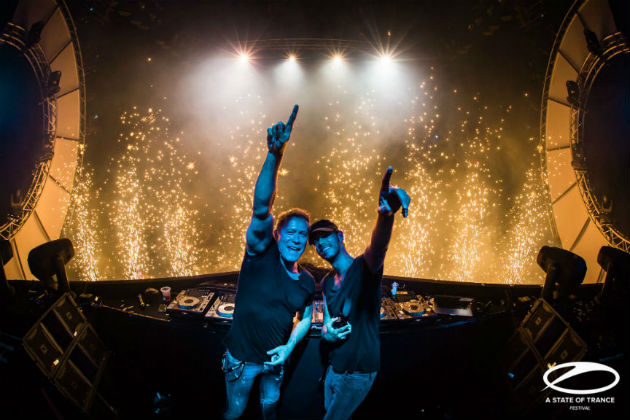 Nic and Bossi’s passion and talent that exceeds beyond their years, has been instrumental in establishing Cosmic Gate as one of the most influential artists in the industry. Having experienced the multitude of transitions in the trance music scene, the dynamic duo have eased through their limitations to add new influences and pioneer a changing scene with their record label, Wake Your Mind Records. With their recent ‘Start To Feel’, full length LP, the lads have managed to portray a fresh approach to their music, more so with the modern sounding design as well as detailed song writing.
While we were particularly excited to catch them play at the ‘A State Of Trance’ Festival, Asia, we were further privileged to catch up with the duo backstage for a quick fire chat!

Much like the transition of the sound from the late 90’s, the recent developments in and around the studio have been key to the duo’s signature sound. As we spoke to the guys about their studio requirements and what’s changed over the years, they’ve made the switch from the hardware dominated studios back in the day towards a more software centric production process. They also mentioned the Access Virus as their main source of hardware for synth design as well as Logic Pro as their DAW of choice. While it’s been a pleasure listening to their latest album (+ the deluxe edition) they’ve certainly been an inspiration for upcoming producers with their detailed productions from the studio.

2. With the trance scene’s growing proximity to newer sounds, how have you braced the changes with your own studio experimentation for new music?

For us its less that the Trance scene is changing and we change then as well with what we do in the studio, we see it more that we push musical boundaries forward, we want to create new sounds and music by doing something new, we like change, we think its important. As a producer to do the same sound too long would bore us, its a natural thing for us to evolve and add new influences and sounds, so lets see where studio experiments and our feel for what we like will lead our Cosmic Gate sound to in the next years, we are looking forward to it!

The recently released deluxe edition of their 2 part LP has been doing the rounds as one of their best pieces of work yet, more so with the deluxe edition featuring some of the biggest industry names on remix duties. While we broached on the subject of the reason for choosing those particular producers for the remixes, they stressed on the need for a more DJ friendly version of their favorite tracks, from their favorite producers and industry friends, which they would prefer playing out at clubs and festivals. It’s more of a personal pick of artists than anything.

4. About the deluxe edition of “Start To Feel”, you mentioned that the selection of remixes stressed on the need for a more DJ friendly version of your favorite tracks. Which remixes have you played the most and how has the crowd’s reaction been?

Not necessarily more DJ friendly as a lot of the originals are made for club plays already, but we sure picked Remixers that we play music from in our sets, guys we thought that can do a great job on Remixing our music, and now with the whole package be finished, we think they all did, great job, Thank you very much guys! To mention just two maybe, we love playing Rafael Frosts Remix of Sparks after the sunset and Alexander Popovs Remix of run away, but could’ve mentioned so many more here, please go and make your own choice, we think the variety of styles is really good, check it out!

5. When we first heard of the deluxe edition of STF, we really were excited about the prospects of getting our hands on the physical copies. Turns out, its digital only. Would you like to share why this is?

Oh, very easy answer, its basically too much music to put it even on CD, as the Original Tracks are part of the Deluxe edition as well. Plus the demand for CD is simply so small in the times of streaming
that it makes no more sense to do it, sorry for guys like you, but that is the bitter truth we all have to face, after the Vinyl also CDs basically will die out more and more, physical copies and cool Artwork! Will be something to watch in a museum in the future, as sad as it is…

Post #ASOTFESTASIA, we also managed to catch up with the Guys to discuss their experience of playing at #ASOTFESTASIA and how has India changed for them ever since they first toured here. Read on to know what they had to say. :)

6. Share your experiences from #ASOTFESTASIA. How has India changed for you guys since you first toured here?

#ASOTFESTASIA simply was the by far biggest show we played in India over the years, and tbh, we felt it was the best crowd too! We had a blast up there on stage, sometimes it feels the crowd talks to you,
gives you so much energy and love, and this was how we felt up there, you guys can be really proud on how you represented India in the worldwide ASOT calendar, it was simply an awesome vibe that we felt all night.

7. Thanks a ton Guys. It was a real pleasure meeting you at #ASOTFESTASIA and listening to your set.

Thank you guys, we had a great time in India, and as said before we felt the Mumbai crowd was simply FANTASTIC, till hopefully soon!

The duo also played an exclusive guest mix in the second segment of the “Sunburn On Air” radio show. You can check it out below.