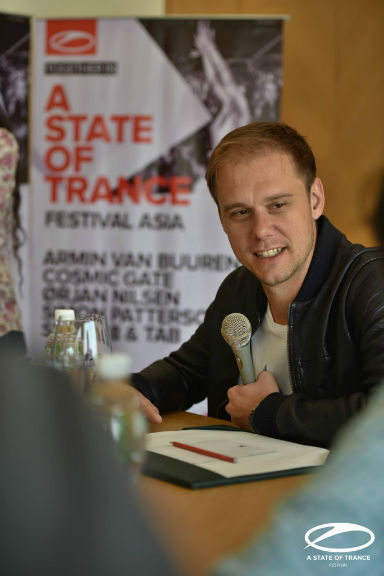 The ‘A State Of Trance’ brand gained another major property to it’s name with the announcement of the ASOT Festival tour, a travelling international festival tour!

“This year, we’ll venture into new territories by bringing you on a brand new musical journey that infallibly captures the true spirit of A State of Trance. Divided over several continents in the most incredible locations, A State of Trance festival will deliver the unique ASOT vibe and electrifying atmosphere in its ultimate purest form” – Armin van Buuren

Kicking off the tour with it’s first stop at Sydney, Australia, back in February and followed by Utrecht, the tour progressed onto it’s Asia leg in Mumbai, India. Sticking to his roots, Armin has solidified his standing as Trance music’s most influential curator. Embarking on the hotly anticipated ASOT Festival in Asia, we had the opportunity to catch up with Armin at the press meet curated by Percept, at Mumbai where a number of topics were broached upon. The Armada boss also reflected his experiences and opinions on the subjects ranging from his radio show to more personalized topics. Read more below to find out what we learnt from the press meet.

Armin van Buuren – Music itself has been the biggest inspiration. When I was young, I used to listen to the radio a lot.

2. Favourite character from Game Of Thrones

Armin van Buuren – Would love to be someone from the Stark family.

3. One of his favourite movies

4. What continues to influence Armin

Armin van Buuren – What I like is that production techniques are constantly evolving. I am influenced by the new producers as they bring something new to the table everytime.

5. What does a normal day look like for Armin?

Armin – Ever since I became a dad, I have become more of an early-morning person compared to a late night person. I end up waking early and I am in the studio by 9 am, usually with Benno. I will be in the studio till 5 after which, I pick up the kids, play with them. My day ends back in the studio where I again work on producing or end up working on the radio show. I should probably spend more time with my wife! Haha.

6. Endless argument between underground and mainstream and the fact that people make statements like his radio show is becoming more mainstream week-by-week + the current influence of trance on the EDM scenario

Armin – Well, I get tons of messages stating that my radio show is one of the best underground radio shows across the globe. What is mainstream to someone, is underground to someone else and vice versa. What is important to me is the music. For me, tracks that move the scene forward are the ones that can’t be put under one genre.

7. His views on the dance music talent in India

Armin van Buuren – India has grown really big. What I like the most is that the fans seem to understand dance music really well. #ASOT trends every week in certain cities from this country so it means that people here do follow dance music. In terms of talents, there’s one..uhhmmm, Sartek, I believe who recently got signed to Armada trice, which is one of the sub-labels of Armada. Honestly, when I receive the demos, I don’t look at the country. Music is more important to me. If its a good track, its a good track.

8. What did he first envision when he started off his radio show? Did he ever imagine that it would become as big as it is now?

Armin van Buuren – No! I honestly never imagined any of it. For me, I wanted a 2 hour window where I could play the tracks that I love. The idea of a radio show was inspired because when I was young, I used to listen to a lot of radio. And when I started off with this, I wanted it to be a 2 hour window where all dance music fans can come together and enjoy. My very close friends and colleagues called me crazy for starting a 2 hour radio show. They said, “2 HOUR RADIO SHOW!! Have you gone mad?” And now some of them have their own radio shows.

9. One piece of advice for upcoming producers

Armin van Buuren – I would tell them, “don’t be a prisoner of your own style.” They need to push the scene forward with new ideas and there are no limitations.

Armin van Buuren – Well we have already started planning for it (ASOT 750). It’s hard to believe how time is flying. We started off the ASOT global celebration tours to celebrate the ASOT birthdays. Now, I want to do something to revolutionise and freshen up the entire ASOT concept. This time, we started ASOT festival and I feel proud that I am the only dance music artist to have my own festival. Likewise, we will do something new and fresh for ASOT birthdays going forward.