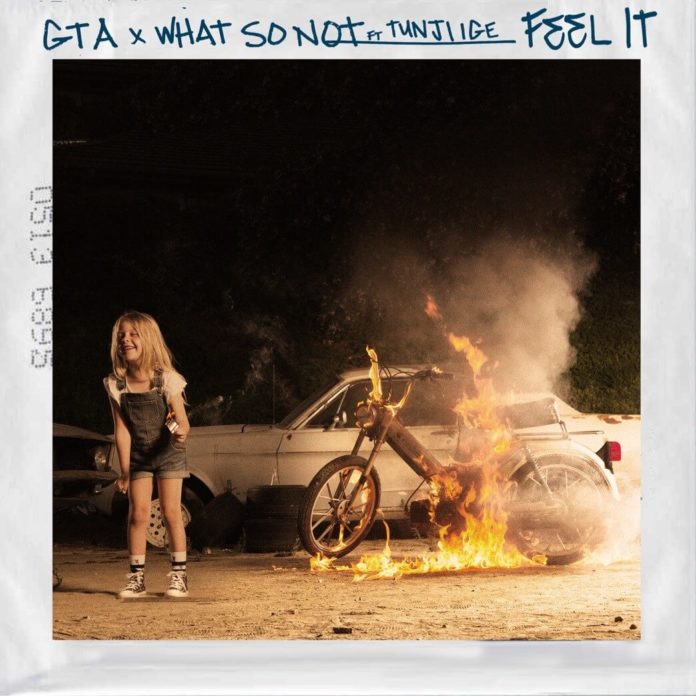 Julio Mejia and Matt Toth – better known as GTA or Good Times Ahead – return with What So Not for a second glimpse into their debut album “Feel It.”

The new track, which premiered as a “World First” on Zane Lowe’s Beat 1 radio show yesterday, is their second collaboration from their forthcoming LP and features Pennsylvanian rapper Tunji Ige.

GTA has teamed up with leading Australian producer Chris Emerson, AKA What So Not. What So Not has gone from strength to strength recently with standout performances at Las Vegas’ Electric Daisy Carnival, Australia’s Splendour In The Grass, and on his sold out co-headline tour across Australia with Fools Gold founder and DMC legend A-Trak. This fall What So Not embarks on his largest headline tour ever when he crosses North American on his Divide and Conquer Tour.

“Feel It” also follows another of GTA’s collaborations from their pending debut, “Get It All” with Wax Motif. Watch the WeWrkWknds-directed video which features two sparring lovers in a battle for the other’s heart HERE.

After years of cultivating songs, mixes and remixes, and overall vibes for festivals and tours, the Miami-bred “good vibe”-makers will release their anticipated eponymous full-length album, Good Times Ahead on October 7th.

Featuring Tinashe, Vince Staples, Tungi Ige, Iamsu!, Jarina De Marco, RKCB and Karina, the long-waited debut is a testament to their “Death to Genres” mission statement while highlighting their multiple influences and eclectic production ear. With each of the 10 tracks, Toth and Mejia aim to make you above all “feel it” and ultimately prove that “dance music” is best defined as whatever makes you move.

For years, GTA has supported numerous acts on the road like Rihanna, Calvin Harris, and Tiesto, as well as in the studio with talented comrades such as Diplo, deadmau5, Kaskade, Martin Solveig, Flosstradamus, and A-Trak. Prior to their 2016 residency at Hakkasan Vegas, the 25-year olds have performed on six continents including their own headlining tours and have thrilled crowds with their innate ability behind the decks at premiere festival such as Coachella, Lollapalooza, Ultra Music Festival, Made In America, EDC, Tomorrowland and more.

Whether it’s their own original songs, an innovative remix, or collaborations with some of music’s A-list artists, GTA have continued to receive support from both fans and the “who’s who” in the music industry. Be it their 2013 Diplo-assisted single “Boy Oh Boy” (over 86 million YouTube plays), their 2015 hit “Intoxicated” with Martin Solveig (which went top 5 on UK charts), their genre-bending collaboration with Rick Ross on “Movin Bass” (over 11 million plays on Spotify), their remix of Rihanna’s “Bitch Better Have My Money” (5 million plays on Soundcloud), or their being enlisted by Rick Rubin on his Star Wars: Headspace compilation, GTA are paving the way for genre-less music to stand at the forefront.