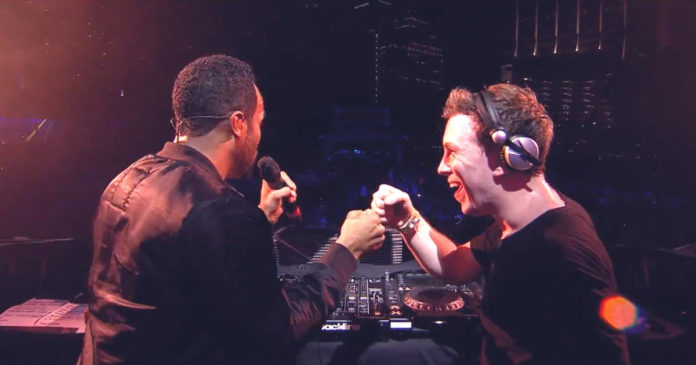 “Bet you never thought we do sumin’ like that, givin’ you sumin’ sumin’ you never, never had, Craig David and Hardwell, we holding back”.

Slickly out of starting blocks, this bass-line jam drives the vibe into an entirely new genre for the Dutch don, as he pairs up with the golden boy of UK garage for a sassy, no holds barred house banger! Giving the track it’s world exclusive first play during Hardwell’s headline closing set on day 2 of Ultra Music Festival in Miami, Craig David joined Hardwell on stage for a live performance of the track that, as seen in the official music video, caught everyone at the festival, and those tuning in, by surprise.

Dissecting the garage template, stripping back to basics and applying a driving-bass-heavy arrangement, the resulting affect sees a track deep-rooted in Craig David’s flawless garage flavours, combined with Hardwell’s rave-ready production qualities – except this time they’re tinged in a heavenly dose of r’n’b. From amplifying audiences at his residency at Hakkasan Las Vegas to his weekly summer base with his night DNA at Ushuaïa Ibiza, ‘No Holding Back’ has already gained a distinction amongst dancefloor fans throughout the summer, and now looks set to find its place with fans worldwide with the official release of the track.

After what has been a 5 year break from releasing music for the popular UK hit maker, Craig David is firmly back in the public spotlight and is currently working on his 6th studio release ‘Following My Intuition’. After recent collaborations with Major Lazer/Katy B, Big Narstie and Kaytranada, the iconic singer/songwriter is now officially releasing his much anticipated collab with one of Holland’s leading dance music DJ/Producers, Hardwell.

Recently winning ‘Best Global DJ’, ‘Best Progressive House/Electro DJ’ and ‘Best Solo Artist’ at this year’s IDMA awards in Miami, following an impressive 12 nominations, Hardwell’s 2016 has been a hugely active year so far. Following being the first headline DJ to sell-out a 40,000 capacity German arena, the Dutch maestro will return to the country this month to close his I Am Hardwell – United We Are world tour with a solo show at the world renowned Hockenheimring.

‘Following My Intuition’ is available for pre-order now, with ‘No Holding Back’ available as an Instant Gratification track.