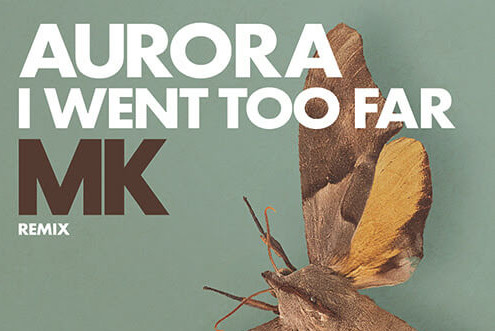 MK lends his production and remix skills to Norwegian singer-songwriter Aurora on the song “I Went Too Far,” taken from her latest album, All My Demons Greeting Me As A Friend. The track opens with Aurora’s original hummed melody and verse, over soft drums and subdued chords. Adding his signature chopped layering as claps kick in for the build up, MK’s remix gives the track a summery, upbeat and dancefloor-friendly feel, without sacrificing the beauty of Aurora’s original vocals.

This particular MK offering comes on the heels of his latest original production, ‘Piece Of Me’ with Becky Hill, which was premiered during Pete Tong’s Live in LA event. Annie Mac subsequently gave it her ’Hottest Record’ stamp, with the release ultimately hitting #1 on the BBC Radio 1 Dance Chart.

Since the release of her latest full-length release in March, which gained over 150,000 equivalent album sales, Aurora has gone from strength to strength, reaching over 37 million YouTube views and 90 million streams across all Spotify releases. Aurora is now set to perform at several of the top UK festivals this summer, including the respected and popular Latitude Festival this weekend, Festival No.6, and the beloved Bestival. Aurora’s biggest UK headlining tour to date kicks off later this year, starting in October.

MK’s reputation in the world of production is nothing short of impressive. His remix of of Storm Queen’s “Look Right Through” hit #1 in the UK singles chart and defined the sound of the summer, while his remix of Wankelmut & Emma Louise’s “My Head Is A Jungle” saw continued success worldwide. His handiwork can be heard on official remixes for Lana Del Rey, Ellie Goulding, Sam Smith, Rudimental, Hot Natured, Kant, and Pharrell to name but a few, with his version of RÜFÜS DÜ SOL’s “Say A Prayer For Me” serving as his latest stellar offering. MK’s Area10 brand has been hosting stages throughout the summer at We Are FSTVL, Parklife, Creamfields, Tomorrowland, along with his summer Area10 residency at Pacha, Ibiza.