With a combined fifty-plus years experience at the forefront of the French dance music scene, Timid Boy (Damien Almira) and Ohmme (Olivier Giacomotto & David Lecocq) have the productions credentials to match some of the best in the business.

Now, off the back of their already formidable individual careers, the three electronic musketeers join forces with long-time friend and esteemed stage designer, Alban Piot, for their foursome’s first collective project and one of the most exciting label launches of 2020 – Sacré Coeur Records.

“Sacré Coeur Records is a French techno pool and a kind of ‘dream team´ made up of four characters, four strong personalities and four friends with big roots and complementary careers in the music industry. Union is our force. We really believe in this.”

Set up as a platform to champion some of the brightest up-and-coming talents on the French techno circuit – as well as being a home for their own prolific stream of output – Sacré Coeur Records officially launches with the release of Timid Boy’s three-track EP ‘Ceremony’.

Out now, the EP kicks off with a retrospective, ravey title track from Timid Boy, who expertly layers old school synth lines, dark soundscapes, and intricate drum patterns, to deliver his impressive debut contribution to the label’s catalog.

On the flip, the second offering sees Timid Boy hand the reigns to label partners Ohmme, as members Olivier Giacomotto & David Lecocq present their modern interpretation of the original with an upfront, dancefloor-ready remix of epic proportions. Last but by no means least, rising French star Matt Sassari steps up to the plate to deliver his own unique edit, as the in-form producer from Marseilles completes a stunning label debut and one of the biggest techno EPs of the year. 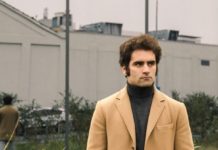 Music Akshay Bhanawat - February 27, 2021 0
Corrupt (UK) makes his move on a new class of groove with his new vocal-driven house single “Romeo” for House Call. The possibilities are...
ABOUT US
What started as an interest, slowly turned into a passion, and before we knew it, we had curated and founded a thriving community of avid electronic dance music lovers.
FOLLOW US
© Copyright 2020 - T.H.E Music Essentials