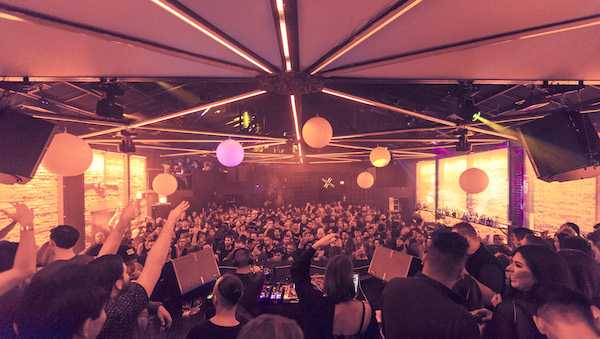 Halcyon brings true innovation and excellence in electronic music to the west coast, with an authentic Balearic vibe.

San Francisco has upped its party game to a whole new level, with the city’s newest 24-hour club, Halcyon, blowing people’s minds with its April lineups.

The venue has gone all out to fulfill its mission of bringing in the hottest electronic talent to America’s West Coast, and is proud to welcome Will Clarke, Josh Wink, Sébastien Léger, FINA Records & friends: Delano Smith, Jimpster, Corbi b2b Simon Morell; Eli & Fur, Josh Butler, MK and Serge Devant plus more to be announced. Halcyon has quickly forged an enviable reputation for quality clubbing, bringing a unique Balearic vibe to San Fran that reflects the Ibiza roots found within the Halcyon team. The April lineup delivers top tier artists, ready to push the Pioneer Pro-Audio soundsystem to its limits, as the coolest clubbing crowds enjoy production values second-to-none.

Tickets for April are on sale, here.

Since opening in November 2016, the 400-capacity, converted Victorian warehouse has welcomed some of the world’s most respected house and techno DJs to the turntables, as well as a series of avant-garde live performances. Some of the many Halcyon highlights include, Dubfire, DJ Sneak, Kenny Dope, Tiefschwarz, Lee Burridge, Marco Bailey, Eats Everything, Way Out West, Kevin Saunderson, Detroit Swindle, Robert Babicz, Doc Martin and more.

First up on 1st April, Bristolian techno DJ and producer Will Clarke comes to Halcyon. Renowned as a member of the Dirtybird flock and for releasing a plethora of chart topping records such as ‘Big Booty’, ‘The Goog’ and ‘Can You Funk’ (played in every club around the globe from the likes of Jamie Jones, Seth Troxler and Eats Everything to name a few), Clarke will show the Halcyon faithful just why he has rocketed to great heights in the house and techno scene.

Next on 7th April is another treat as Josh Wink flies from his Philadelphia home to San Francisco. Regarded as one of the true pioneers of electronic music, Josh Wink was a key player during the rise of underground club culture in the nineties with his hits ‘Higher State Of Consciousness’ and ‘Don’t Laugh’. This combined with his Ovum imprint, which recently celebrated its 20 year anniversary, has allowed Wink to pave the way for house and techno across the world.

The 13th of April sees Frenchman Sébastien Léger bring decades of experience to the Halcyon dancefloor. Having lived the nineties French Touch movement, alongside such luminaries as Daft Punk and Laurent Garnier, Léger has since carved a niche sound, via his highly successful label, Mistake Music. From quirky techno, to electro bangers, to peak-time house romps – expect this and more in abundance at Halcyon.

Leading house imprint FINA Records will take over the club on 14th April as the first date on its FINA & Friends 2017 global tour, with a killer lineup. The label has become one of the most essential and respected house imprints of its time, counting electronic luminaries such as Move D, Leif, Roberto Rodriguez, Cottam and Francis Inferno Orchestra as part of its artistic family. At Halcyon, Corbi & Simon Morrell (FINA owners & accredited solo DJ and Producers) will go back-to-back whilst being joined by FINA guests, including one of the original crop of Detroit DJs, Delano Smith, and revered deep house producer, Jimpster. Just as FINA’s releases are at the forefront of the global scene, this night will undeniably deliver a rich vein of house music which is not to be missed.

On 21st April, Halcyon presents one of the most talented duos around, Eli & Fur. Their accolades include a DJ Mag ‘Best Breakthrough DJ’ award, collaborations with Shadow Child and Erick Morillo. They’ve played key shows alongside Carl Cox at his infamous Space residency, as well as at Ushuaia’s notorious ANTS.

Joining Eli & Fur on the night is one of today’s top house producers Josh Butler. His discog boasts many acclaimed releases on prestigious labels such as Noir Music, Avotre and MadTech. The launch of his label Origins Rcrds made waves across the industry as Butler teamed up with original house music pioneers, Kerri Chandler, Todd Terry and Marshall Jefferson, to educate the younger generation of house music lovers on where it all began.

The 22nd April sees MK land at Halcyon, a man responsible for creating some of the defining sounds of early house including ‘Burning’ and ‘Push The Feeling On’. Having re-invented himself in recent years and with the re-launch of his iconic label and event brand Area 10, MK continues to be as current as ever as he finds himself topping charts and in the boxes of DJs worldwide, once again.

Rounding off another stunning month of music on 28th April at Halcyon is Serge Devant. Masterful and versatile, Devant creates beautiful vocal-led deep house, that have turned heads of a number of the scene’s key figures, including Hot Since 82, Lee Foss and Jamie Jones, and Damian Lazarus. Prepare for more heads to be turned when he arrives at Halcyon.

There’s no better destination for lovers of electronic music, as Halcyon’s fast-growing clubbing family enjoy one of San Francisco’s (very rare) 24-hour licenses, giving true musical freedom to DJs and clubbers alike. More lineups for April 2017 are yet to be announced, so keep an eye on their Facebook page for all the latest news and updates.