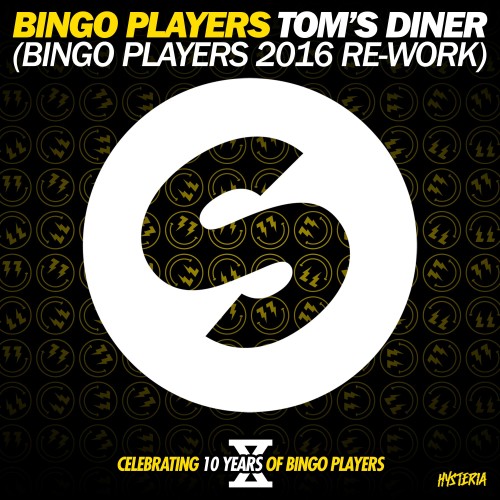 Revisiting the classic six years after its release, ‘Tom’s Diner’ played an important role in Bingo Players’ foundations, as it drew attention to the production duo and helped to put their name on the map. Despite the tragic passing of Paul Baumer, Maarten has continued to fly the Bingo Players flag, and celebrates 10 years of Bingo Players this year. Bingo Players can look back on ten years of mammoth success, as they were among the first wave of European DJs to dominate with their fresh sound in the US and all across the globe. Taking the original to a completely different realm, Maarten alternates between passages of Bingo Players’ trademark four-to-the-floor drumbeats and rich synth work, placing Susanne Vega’s enticing vocals atop a pulsating bassline. Boosting the BPM with his signature hard-hitting claps and backing sirens, it is safe to say this edit will make its mark on 2016’s summer season with its fierce, yet familiar sound.

Commencing 2016 on tremendous high, Maarten has already received widespread acclaim for his first original of the New Year, ‘Lone Wolf’. Kicking off the festival season at Miami Music Week with the successful second edition of his Bingo Beach party, Maarten moved over to Asia to complete a bustling Asia Tour, and has recently announced his Bingo Beach Saturday pool party residency at the Rehab Club located in the Las Vegas Hard Rock Hotel! Teaming up with Spinnin Records, Hysteria Records is set to release Bingo Players’ 10 year anniversary EP, which will feature this edit of Tom’s Diner’, alongside remixes from A-Track and many other renowned names in the electronic music scene. Keep up-to-date with Maarten’s socials for more exciting news on all things Bingo Players!