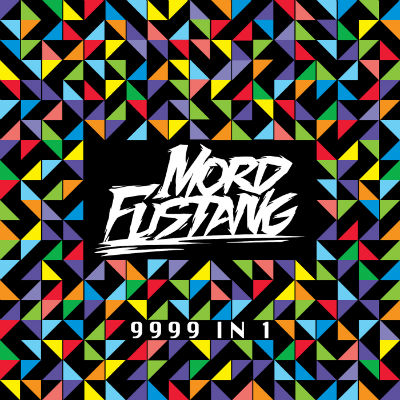 Apt words from the man himself, Mord Fustang’s latest offering, after an extended hiatus, brings so much to the table, much to the delight of old and new fans alike! There’s a little bit of everything in this multi-genre influenced album, from the sonic references to analog and video game culture, coupled with 8-bit nostalgia.
With 9999 In 1, Mord Fustang sticks to what he does best, and he does not disappoint with his first full length LP. The complextro scion, known for his penchant for quirky synths, disco basslines, those delightful vocal chops and a wobble or two, does just that and so much more.

Listening to the album straight through, starting off with the opening single ‘1984’, where Mord experiments with the classic retro video game sound and crunchy basslines, this 110 bpm beauty makes for a perfect opener.

‘Dopplegangbanger’ brings the right amount of energy to the table featuring the classic MORD synth plucks and powerful drum samples, giving most beatport hits a run for their money.

And there’s ‘Drivel’. The first preview of the album which was introduced back in November 2014, this one will have you on your feet in no time. This one reminds me of the good old Mord Fustang when I was first introduced to his music. The signature arpeggios and a complex introduction leading to a booming melody will leave you breathless for more!

‘Elite Beat Agent’ is realistically my favourite track of the album. I vaguely remember this tune making an appearance on Lazy Rich’s Radio Show back in 2011, while also being a staple in Mord’s sets. Elite Beat Agent is as groovy as they get. Those vocal chops may remind you of another Mord Fustang classic, ‘Taito’, while capturing similar energy and charisma. This one makes for a viable mainstage banger candidate!

‘Milky Way (Pt. 2)’ is Mord’s rework of his classic ‘Milky Way’ which doesn’t sound much like the original. A refreshing wave of quality dub, nevertheless.

‘No Way To Stop’ is energetic and groovy and those chord synths take you back circa 2012, only this time with a fresh wave of complexities.

‘Pop’. While this beauty trumps a lot of the ‘POP’ tunes out there, this refreshing tune featuring vocals from the talented LIINKS, might just be on repeat mode for a long time.

The album takes a heavier turn in the form of ‘Press Start’. The aggressive nature, the 8-bit influence and those fine tuned glitch samples will remind you of the classic computer sounds and video games we all grew up with.

‘Skyward World’ is a journey. Period. This 8 minute masterpiece is a breather to the otherwise aggressive sounds in the album and the rhythm works itself perfectly into the sound structure along with calm pads and the occasional vocal chops. This one just keeps going and going.

Smooth from start to finish, the complex blend of synths and melodies combined furthers Mord Fustang’s legacy as one of Dance Music’s finest producers.