From reworking tracks for the likes of David Guetta and Rudimental, to performing at renowned festival Tomorrowland and legendary venues Ushuaia and Pacha, Feder has established a memorable image of himself in the dance music scene, and now with the output of ‘Control’ he continues to follow a path of success in all aspects of his work.

Winner of the ‘Best New French DJ’ at the NRJ DJ Awards and with his previous work seeing him accrue over 330 million video views & over 1 million downloads in his career so far, the official video brings his talents to life as the electronic DJ & pop sensation sets his musical agenda in fine style.

We caught up with FEDER to learn more about his musical background, and plans for 2019. Read our chat here!

FEDER – Very productive! Mylene Farmer’s album has given me many ideas in terms of new collaborations. ‘Control’ also had a very nice start, so we will keep pushing this track in 2019 while preparing a few surprises before summer.

T.H.E – Let’s talk about your musical background? Your sounds are a fusion between deep house and pop. Have you always been attracted to these genres?

FEDER – Not only, but I’ve also been very into urban music since I was young so it’s not impossible for me to explore that genre in the future.

T.H.E – When did you decide to become a music producer, and which artist/s inspired you at the time?

FEDER – Back in London when I was twenty. I used to do battles with other DJ’s and I was frustrated not to have my own tracks, so I quickly started to work on personal projects with Garage Band and Logic Pro.

T.H.E – You recently won the award of “Best new French DJ talent” and are regarded as one of the best talents, from the new generation of French DJs. How does that feel, and which other upcoming French DJs are doing well at the moment?

FEDER – This is truly rewarding, and it represents a motivation for me to keep doing what I do. Nowadays, there are a lot of new artists like Ofenbach who are gaining large success across the world. France keeps revealing talented artists every year and this is such a good thing.

T.H.E – Which French artists have you always looked up to?

FEDER – I have a lot of respect for DJ Snake and his career. Not very far from France, there is also Stromae who has made an incredible album and will have an endless impact on electronic artists of his generation.

T.H.E – How was it working with Bryce Vine and Dan Caplen on your new single – “Control”?

FEDER – Very professional and fluid. They are two great artists coming from different registers and that’s why it was so interesting for this song project.

FEDER – I would like to propose some changes this year, regarding music but also by introducing a label project. There will always be my singles though, as well as different genres of Eps. Stay tuned! 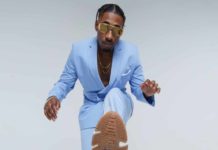