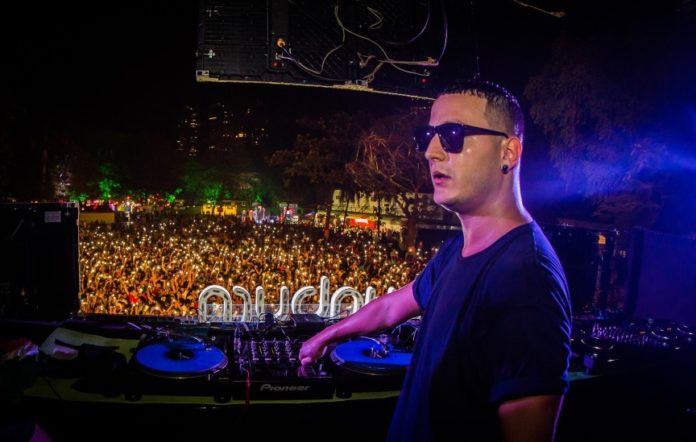 There’s something in the water there, that the French cannot stop churning out dance music experts from their midst, with an almost constant trajectory. DJ Snake, raised in the ghetto himself, started out as a graffiti artist, gaining his moniker ‘Snake’ in his early years.

He’s been strongly held responsible for pioneering the highly popular ‘trap’ sound amongst his peers, with finely crafted and unique productions, leading to what we see as the most popular record of 2015 to his name. Having already raised the bar with his collaborations with Alesia, AlunaGeorge and Dillon Francis to name a few, following his smash hit, ‘Turn Down For What’, we could only imagine he was poised for bigger and better. There’s not much you’d expect him to accomplish after ‘Lean On’, having already smashed all the charts and broken half a dozen records. But we can only hope to see a lot more coming from him!

We had the chance to catch up with him backstage at Sunburn Mumbai and speak to him about ‘Lean On’, collaborating with Indian artists and more! Read on to know what he had to say. 🙂

T.H.E – Lean On is officialy the most streamed song on Spotify! How do you plan to top that and take it to the next level, especially since there aren’t many records left to break?

DJ Snake – The thing is, every time I put out a record, something big happens, and I’m not even trying to make a big hit. When I made ‘Turn Down For What’, the track became huge, and everyone asked me what I was going to do next, and I was like “I have no idea!”. I’m just going to try and make good music and that’s what happened with ‘Lean On’. No one believed in the record initially because there was no superstar on the credits, but it did not stop us from making good music and when we put this out the record went huge. So I’m just going to do my thing and make sure I’m making good music.

T.H.E – Do you wish to collaborate with Hip Hop artists in the future, like Fetty Wap or Wiz Khalifa, maybe?

DJ Snake – Yes, I’m actually working on my album right now and I have a lot of collaborations with Hip Hop artists which I cannot reveal yet!

T.H.E – Do you have any plans to collaborate with Indian artists? What are your thoughts about India so far?

DJ Snake – Before collaborating with any Indian artist, I wanted to come to India to see and learn the culture and feel the vibe because I don’t want to collaborate just to make something fake, but actually learn the culture and make something authentic. I really want to make a record with Indian singers or artists and be open minded about the music. That’s going to be the next thing for me after electronic music, where I want to make world music with a lot of different cultural influences and India is of course one of the biggest cultures in the world.

T.H.E – Anything that you particularly like about India so far?

Delhi, you can still grab the opportunity to catch him live in your city. Grab your tickets here.