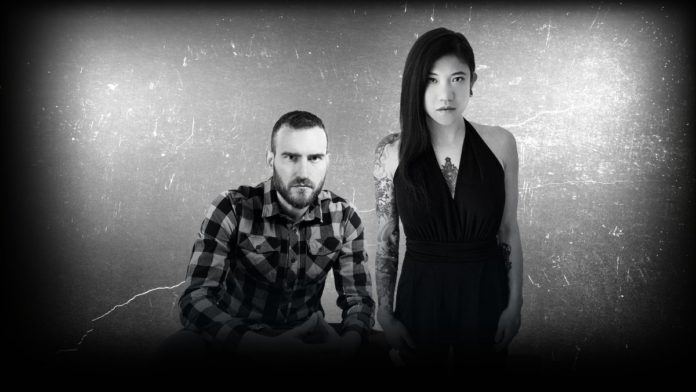 Based out of the heart of London’s vibrant rock scene in Camden Town, London, The Chronicles of Manimal and Samara (TCOMAS) are fast establishing themselves as a formidable collaborative. To further solidify this point, the duo release their 67 minute-long debut album ‘FULL SPECTRUM’ today.

Comprising 11 tracks lasting over 67 minutes long, FULL SPECTRUM was recorded between February and June of 2020 when Daphne Ang (Singapore) and Andrea Papi (Italy) came together as The Chronicles of Manimal and Samara [TCOMAS] to compose and produce their debut album at their home studio during the first London Lockdown.

We caught up with the duo to learn more about this innovative, and forward-thinking album.

The Chronicles Of Manimal and Samara – Thanks guys, Not too bad, despite most of 2021 being spent in London’s third lockdown so far. We’ve been busy with releasing and promoting our album’s lead track, “At The Worlds End”, which we used to raise awareness on the environmental issues that our planet is facing. So it’s  been very rewarding so far.

T.H.E – Before we get into discussing your album, could you tell us a bit about how the band came together, and what does the title signify?

Andrea – We met at The Worlds End – a Metal pub in Camden Town, in London (UK). We realised that we had similar tastes in music. At first, we didn’t think of starting a band together. Later on, Daphne sent me some of her old poems, and I thought they were amazing! They had been covered in dust for years, so I thought it was time to bring them back to life. Over the lockdown, I recorded some instrumental tracks. I wanted Daphne  to provide the vocals for the music. So I asked her if she would like to read her old poems over the music, and that’s how it all started.

Daphne – Andrea suggested I use some of my old poems as lyrics for a techno track that he had composed. My first instinct was to recite it – like a theatrical monologue, not to sing it. This particular recording session actually resulted in our second single, ‘Psychopath’s Monologue‘.” “Psychopath’s Monologue” was actually the first musical work we created together. The lyrics of the song are actually based on 5 sonnet poems that I had written over a ten year period. The magic happened when I spoke the verses out loud, and realised that my poem fit so snugly into the techno bassline at the very first take. This was the moment we realised that we had found our ‘sound’  – and that we would make music and ‘poetry performance’ our thing.

T.H.E – We are really excited to hear your album when it drops later this month. How long has it been in the works?

The Chronicles Of Manimal and Samara – I’ve always wanted to record an album like this one but work, time and life always happened and I’ve never been able to record it. Paradoxically the first London lockdown has been an opportunity to make new music. So, we composed, wrote, and recorded the album’s 11 tracks lasting over an hour, between February and June 2020. By the end of the first London lockdown, “Full Spectrum” was complete. We also released 7 singles independently and produced 7 music videos since August 2020 – so we’ve been really busy!

T.H.E – “Full Spectrum” signifies that it actually covers a wide range of genres. Was this a conscious call, or did it happen on the fly?

Andrea – I was determined to create a sound that could resonate throughout the wide spectrum of musical genres. In particular, I wanted to combine electronic music with rock, two genres of music that usually don’t share the same crowd. I wanted to create something that could bring people together, kind of like what Bob Marley did through his music and the message that came with it.

Daphne – The concept behind the album is for it to take listeners through the full spectrum of life, love and human experience, each song is a complete experience on its own, each combining different balances of rock/metal and electronic elements, while also continuing and building upon the meaning and message presented in the previous.  In fact, we gave the only instrumental track in the album the title, ‘Full Spectrum”. It is a 16 minute-long progressive house/prog-trance track led by metal guitars.

In terms of lyrical content, I wanted the listening journey to emulate human experience of life. So while much of the songs evoke a nihilistic and dystopian world, the album also offers triumphant moments of hope and resilience. Likewise, much of the lyrical content bears stern messages to humanity, reminding us of the ugliness of man and the decrepit state of civilisation. But these grim messages always open up avenues to escape beyond the harsh reality of the modern world – and brings you to a place whereby one can contemplate the transcendence and the numinous of their inner world.

T.H.E – Were there any artists/songs that influenced the creative process for this album?

The Chronicles Of Manimal and Samara – We drew inspiration from Kraftwerk and TOOL as well as the poetry of Sylvia Plath, Virginia Woolf and Jim Morrison. Our musical and lyrical themes are also very much rooted in our interests in classical literature and theatre, as well as in the fields of philosophy, history, and psychology.

T.H.E – How many songs actually didn’t make the cut? Must have been hard leaving them out?

The Chronicles Of Manimal and Samara – We have a dozen more songs that we have yet to release. They are probably enough to release another album.

T.H.E – Which songs were the toughest to produce, from the album?

Andrea – Definitely ‘Love in the Time of Pestilence’ which is an experimental metal track that reflects upon the events of the ongoing pandemic and global crisis. This track has its own signature tempos and because the amplitude waveform view of this track, with its peaks and troughs, is in itself a visualisation of the evolution and progression of the pandemic over the course of the year 2020. This track and accompanying music video is a tribute and homage to all the healthcare professionals around the world who have risked their own lives to save the lives of others.

Daphne – The most challenging songs for me, in terms of writing the lyrics, would be the ones that adapted historical texts – “Love in the Time for Pestilence” and “Atoms”. The challenge was rewriting sometimes ancient texts and setting them in lyricsmode in a way that it is fully integrated within the music. “Deus Ex Machina” – was challenging as well. Being a song about the Greek Tragedy Oedipus Rex, written by Sophocles and performed in Ancient Athens over two thousand years ago, I wanted the lyrics to emulate the style and language of which it was written in, but yet keep it accessible to a contemporary listener.  Probably the most challenging track in terms of performance would be “Tcomas S01 E01”, where I narrate the story of “The Chronicles of Manimal and Samara” over classical pianos and techno lead by black metal guitar riffs using the original script that we had developed and wrote for a manga comic book series.

But each track of the album has its own story and personal challenges. Nothing has been made randomly.

Andrea – When this pandemic is over, we would like to take our music onto the live stage. Also, I would like Samara’s poems to be studied at schools and universities as contemporary literature. I’m a simple man, I would love that my local favourite beer company would pick me as ambassador of the exquisite Camden Hells that I go greedy about.