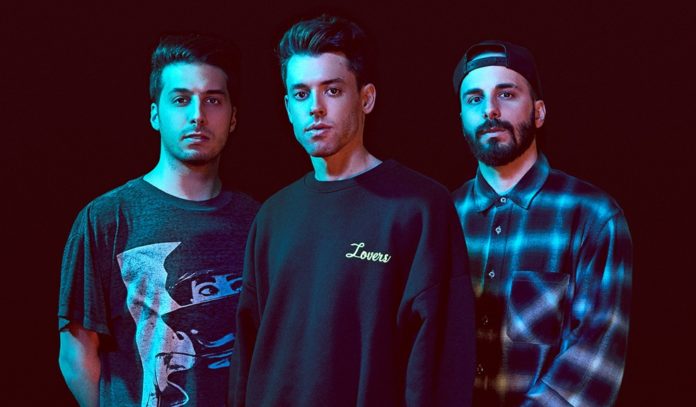 Never ones to slow down and fresh off a massive year that’s only seen their production stock rise, the internationally acclaimed EDM titans Cash Cash have now assembled a star-studded trifecta of talent for their latest single, “Too Late.”

Out today through Big Beat Records, “Too Late” is a sentimental, emotional anthem that pairs Cash Cash’s always-thrilling, hook-laden production with vocal contributions from hip-hop icon Wiz Khalifa and the GRAMMY® Award-nominated, multi-platinum singer/songwriter Lukas Graham. Released alongside its official music video that’ll tug on your heartstrings, “Too Late” is a compelling single featuring undeniable, earnest verses from Wiz Khalifa and an enduring chorus thanks to Lukas Graham’s dynamic, soaring vocals. One thing’s for sure; “Too Late” is definitely a song that anybody can relate to.

In Wiz Khalifa’s words, “I loved working on this project, as it’s different and stands out. The Cash Cash guys and Lukas are very talented — it’ll be dope to see where it goes.” Lukas Graham adds, “It feels good to be on such a huge record, with amazing artists in each of their respective fields. I love the catchy production and Wiz’s simple, but heavy hitting words. There’s a funny story behind this song, because I wrote the hook ages ago, but I could never figure out where to put it or how to finish the songwriting around it. So all in all, I’m super stoked that someone picked it up and made it into something special where my vocal on this powerful chorus really gets to shine.”

Cash Cash is composed of brothers Jean Paul Makhlouf and Alex Makhlouf, along with life-long friend Samuel Frisch. Together, the three DJ, producer and multi-instrumentalists record, mix and master all their music themselves; a feat that few contemporary artists can tout. Over the past few years they have seen massive success with a slew of single releases. Their song “Finest Hour” (feat. Abir) has been RIAA-certified Gold, and their 2019 collaboration with P!NK called “Can We Pretend” hit Top 10 at AC radio. Their single “Call You” (feat. Nasri of MAGIC!) hit #1 on US Dance Radio, and they were also featured on Billboard’s Dance 100 List for 2019. Their smash single “Take Me Home” (ft. Bebe Rexha) celebrated an RIAA platinum certification, and their song “All My Love” (ft. Conor Maynard) has amassed over 100 million streams on Spotify alone. “Matches” (feat. ROZES) also achieved #1 on Dance Radio, and one of their releases “Belong” was featured on Dashboard Confessional’s album “Crooked Shadows.”

With this massive single and all-star collaboration with Wiz Khalifa and Lukas Graham already in the books and destined for the charts, there’s nothing but good things in store for Cash Cash in 2021.