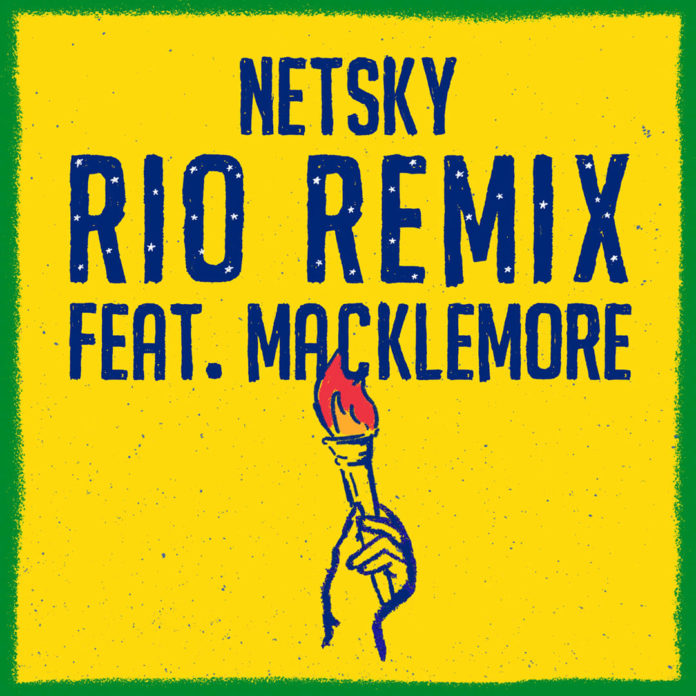 Originally released as Rio last year, a collaboration with Digital Farm Animals and the first single from Netskys third studio album 3, this festival smash has been re-born in 2016 as Rio Remix with the addition of a spectacular feature from 4 x Grammy winner Macklemore. Surfacing just in time for the Rio2016 Olympics in Brazil, the worlds official unofficial Olympic anthem has arrived and is set to become the soundtrack of the summer! The single is available globally now, impacting 9th September.

Rio Remix Feat. Macklemore kicked off with a world premier and exclusive interview with Zane Lowe on Beats 1 and was selected for BBC Radio 1s New Music Friday, where both Netsky and Macklemore chatted to Nick Grimshaw on his breakfast show to share their excitement for the track.

Macklemore said: “I am so pumped to be on Netsky’s Rio Remix. I loved collaborating with Boris. Now were ready for the summer. Let’s go!”

Inspired by a trip Netsky took to Brazil, Rio, was a hit with specialist and daytime radio alike on its first release, and was heard everywhere from underground raves, to muddy festival fields, to the soundtrack for BBC 1s coverage of Londons 2015 New Years Eve fireworks display. It is being used throughout this year as the soundtrack to Netskys role as official musical ambassador for the Belgian Olympics Team whom he will join in Rio De Janeiro during their Rio 2016 campaign.

Netskys huge summer of festivals is currently in full swing with his highly lauded live show making appearances at Glastonbury, Reading & Leeds, SW4 and Panorama Festival in New York amongst others; as well as resident DJ sets at the world famous Amnesia nightclub in Ibiza and DJ Sets all around the world.

Ever since his first appearances on Hospital Records in 2009, one of the scene’s most respected underground labels, Netsky’s star has been rising and in just a few short years, he has built a reputation for delivering relentlessly on-point, hard hitting dance anthems which have earned him numerous awards and accolades the world over. Early releases such as Memory Lane, the infamous self-titled debut album Netsky and sophomore smash 2 have propelled the talented young producer from Antwerp into a meteoritic rise to quickly become one of the most talked about and talented names in electronic music. Recently his huge and dedicated global fan base has been taken to new levels thanks to his critically acclaimed new album 3 which features collaborations from the likes of Emeli Sande, Chromeo and Jauz.