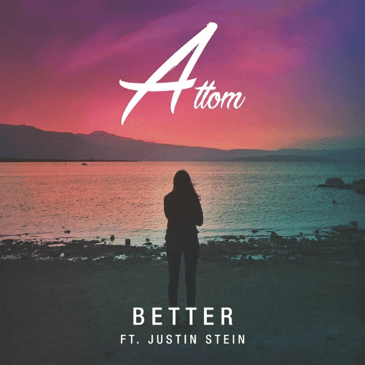 Kyle Stern developed his Attom moniker and his production skills whilst obtaining an informatics degree from the University of Iowa. In 2014, his reputation grew when his first single, ‘Glow’ was picked up by popular YouTube channel, MrSuicideSheep and was officially released on the Big Beat Ignition Miami 2015 playlist. Attom later self-released his track, ‘Her’ which gained over half a million plays across different platforms and the follow-up single, ‘Stay’ soared with over 300,000 plays in under a month. Also known for his remixing capabilities, Attom won a contest for his rework of Odesza’s ‘White Lies’ which led to his first ever live performance at the Bonnaroo Music Festival.

‘Better’ features the vocals of singer/songwriter, Justin Stein. The upcoming pop/R&B singer lends his smooth vocals to Attom’s latest release. ‘Better’ is armed with catchy synth melodies and pulsing club beats, which dominate the infectious chorus. Set to make a summer statement, ‘Better’ is sure to be one to consider for mixes worldwide.