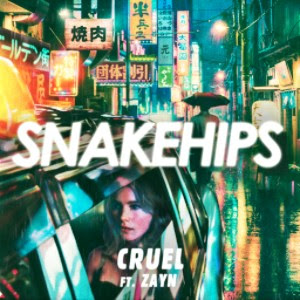 Coveted UK producers Snakehips have teamed up with global superstar Zayn for their new single ‘Cruel’, which is out today. It’s a collaboration that will excite many; touted as the UK’s answer to RnB, Snakehips won an Ivor Novello for recent top 5 single ‘All My Friends’, whilst Zayn’s debut solo album ‘Mind Of Mine’ topped charts and broke records worldwide with critical acclaim.

Underpinned by Snakehips’ trademark summery, glitchy new-school RnB production, Zayn’s soulful vocals make this a summer 2016 anthem. The track comes to a climax with rousing choruses, whilst his smooth voice is left to stand alone over a solitary piano melody in the emotive intro and outro.

It’s the latest high-profile collaborative single from Snakehips, whose most recent EP featured Dr Dre protégé Anderson.Paak and popular US rapper/singer Tory Lanez. Top 5 single ‘All My Friends’ featured Chance The Rapper and Tinashe, and led to a live performance on famous US TV show Jimmy Kimmel Live. To top this off, the duo will be headlining KOKO on Thursday 6th October, tickets are available for this here!