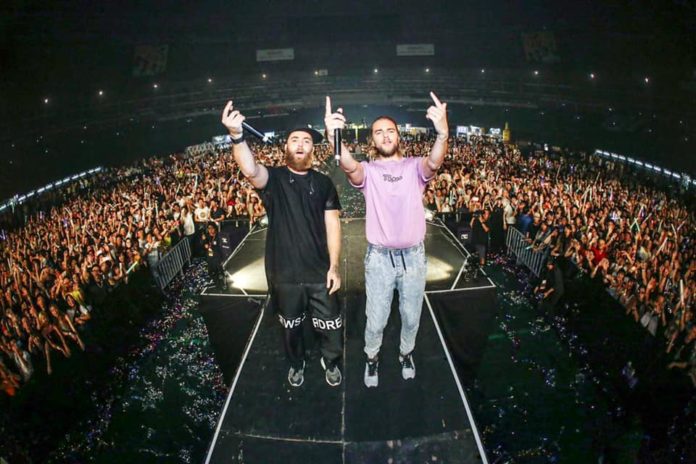 Showtek have linked up with fellow Skink artists Linka and Modello’G on an uncompromising new single ‘Straight Shots’, out via Skink Records.

One of the biggest acts in dance music, Showtek have dominated the international music industry with their melody-powered hooks, beat-heavy songs, memorable anthems and high-energy performances. Cementing their reputation as one of dance music’s most prominent double acts, they boast an impressive collection of accolades, including Best European DJ and Producer, Best Track, Best Artist Album, Beatport Music Award for Best Selling Track, and six Beatport #1s.

2019 has seen Showtek drop a string of acclaimed tracks, partnering with Sultan + Shepherd on ‘Way We Used 2’ , collaborating with EDM titans Steve Aoki and MAKJ on dancefloor bomb ‘Rave’ which has amassed 9.6 million streams on Spotify since its June release, as well as remixing Major Lazer’s tropical offering ‘Can’t Take It From Me’.

Garnering global support on hit releases ‘Your Love’, ‘Sun Goes Down’ and ‘Believer’, which racked up over 200 million streams on Spotify collectively, Showtek have further established themselves as one of dance music’s most successful production duos, with their collaboration list including names like Moby, Major Lazer, Tiesto and Hardwell. They also linked up with David Guetta in 2014 on hit single ‘BAD’, which went 10x Platinum, amassed over 800 million views on YouTube and generated 389 million Spotify streams.

Belgian artists Linka and Modello’G who linked up with Sidney Samson this year on revered track ‘In Control’ and MAKJ on bass-centric offering ‘Fire’, have been climbing the ranks over the years, finishing 70th in the 2016 ‘Top 100 Belgian DJ’ rankings and drawing support from the likes of Juicy M, Ummet Ozcan and Blasterjaxx. Their talents have seen them play acclaimed festivals Ultra, Parookaville, Electric Daisy Carnival and Electric Love Festival to name but a few.

GC (Gate Citizens)’ music has found a home on Skink over the past few years. He previously featured on Showtek’s raucous 2017 hit ‘Moshpit’ and earlier this year linked up with fellow Skink artists Linka & Modello on euphoric single ‘Butt’.

A thrilling collaboration of musical minds, ‘Straight Shots’ is the end-product of a combination of groundbreaking styles. Next up from Showtek’s highly anticipated ‘EDM Sucks/Island Boy’ EP is Hard Driver’s remix of ‘We Like To Party’, a track set to shake things up in the dance music scene.