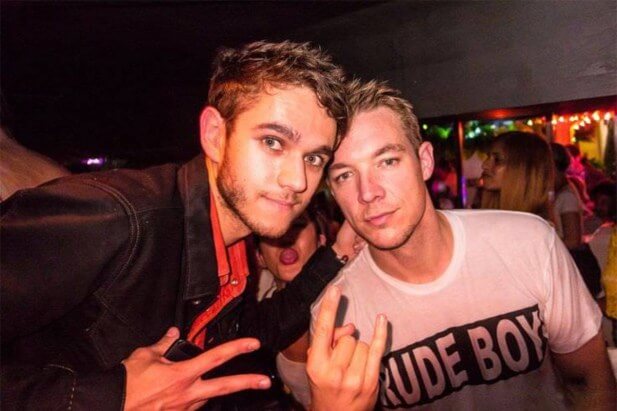 It’s just another day when some DJ starts a twitter war with another. Whether its between deamau5 & carnage (which I won’t even waste my time writing about) or Diplo & Zedd, one thing’s always common – its just a war of egos.

So a lot have us have already heard Zedd’s latest track ‘Candyman’ featuring vocals from Aloe Blacc. What we haven’t seen is the M&Ms advert video for which it was made. So before we get started lets have a look…

It all started when Diplo put out the following tweet,

No wonder Zedd hit back.

@diplo stop being a jealous little bitch and do us all a favor and just shut the fuck up.
Thank you. :-)

And ofcourse this was time for the troll king to have his say on the matter as well. Enter, Joel Zimmerman…

..unless it's a bieber collab… Coz that's in no way, about money. We all know zedds shit sucks. But we love him. https://t.co/aYQ7k6ylNX

Literally hopped off Justin's dick to say someone's shit is about money? God DAMN I love Twitter. I do.

@deadmau5 Joel why are u so obsessed with Justin's wiener ? I can introduce you if you want ?

@diplo I can't. I once yolod a swag so hard my whole fam was lit.

Literally hopped off Justin's dick to say someone's shit is about money? God DAMN I love Twitter. I do.

*drops mic* *tends to his goats*

Now while deadmau5 tended to his goats, Diplo went back to Zedd… Zedd’s reply was deleted but he replied back with a simple “ *you’re “.

At this point there’s clearly no point in arguing with Diplo. Guess he’s just in one of those moods of his or just drunk. Either way, Zedd played it pretty cool throughout; and deadmau5, yea we love you too.
Though if it helps, here’s what a fan had to say about the whole argument…

Following this whole argument a lot of other DJs decided to pull diplo’s leg by starting a whole DJ Royal Rumble on Twitter. Sit back and laugh away…

Lol holy shit @diplo fuck my gf next plz, I'll throw in a bag of m&m's

DJ Snake was pretty clear in what he had to say!

Now comes the best part, a couple of confusing selfies!

Seriously, what the hell just happened!