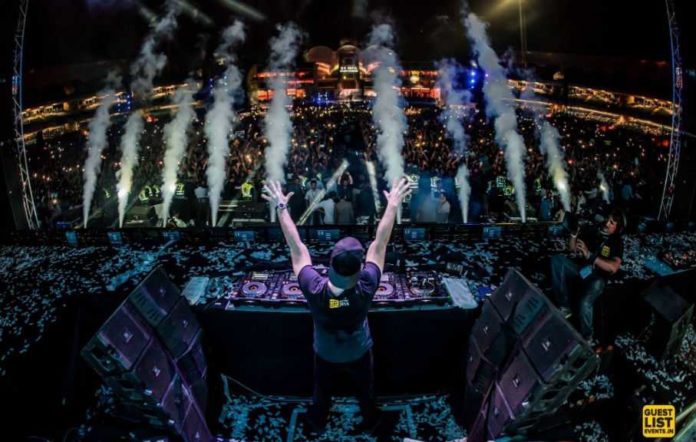 On 13 December 2015, Hardwell teamed up with India’s Guestlist4Good Social Enterprise and Mumbai based non-profit organisation Magic Bus, to stage an aid event, that ended up providing education for over 18,000 young underprivileged children living in India.

The event captured the world’s attention and set a precedent within the electronic music community. Now, in 2017, Hardwell is returning to Mumbai, to headline the third day of the World’s Biggest Guestlist Festival, with the ambitious task of bringing a brighter future through education to more than 100,000 young children.

In cooperation with the GuestList4Good social enterprise and its founder Shailendra Singh, Hardwell and Anna Knaup (CEO of international electronic music agency Anna Agency) come together once again to deliver the third massive day of the ‘World’s Biggest Guest List Festival’ (WBGLF), in association with Hardwell’s United We Are Foundation. Expanding from its previous edition, the now 3-day festival will cater for sports, live Bollywood and pop music, with Hardwell closing out the festival on Dec 3 with a show called ‘United We Are by Hardwell’. Talking about the target for this year’s event and United We Are Foundation, Hardwell said: “In 2015 we helped put the spotlight on something that is of great importance to the future of many young children living in Mumbai. The entire team were blown away by the response of the fans and sponsors that day but it felt like only the beginning of the journey. Although we achieved, and excelled, with our donations goal, we all knew that more could be done. So, it is for this reason we decided to go back to India and make the goal even bigger by aiming to educate 100,000 young children. And this time, I’ll be joined by some of my biggest and best DJ friends who will be helping us achieve this aim.”

Titled ‘United We Are by Hardwell’ the show will see Hardwell, joined by some of his DJ friends, attempt to put attention back on to the subject of child education in India and place more awareness on the deprived conditions of the slums of Mumbai, that many of these young children have to live in day-to-day.

To get on the guestlist for ‘United We Are by Hardwell’, fans should pre-register here.

Working once again with the Magic Bus Programme, the ‘World’s Biggest Guest List Festival’ aims to bring about positive social change in India by putting more international awareness on the issue of education. The goal is to kick-start an educational revolution that helps navigate children of the slums from childhood to adulthood by giving them access to tools to make their own social change later in life.

Anna Knaup commented by saying: “There is a vigorous energy about this return to Mumbai with the United We Are Foundation. During our first trip, we had a chance to connect with the children living in the slums and later witness the power of support from not just the local community but the world at large. The extremity of the poverty for these children is real and truly heart-breaking. Now we have a chance to make a bigger impact on helping to change their lives for the better.”

Inceptor of Guestlist4Good, Shailendra Singh adds: “84 million children in India do not attend school. That is more than the entire population of Germany! Joining hands with Anna Knaup and our firestarter Hardwell for day three of the festival, we will throw the biggest entertainment-for-good event on the planet in 2017. With the love and support from the fans, we aim to enrol 100,000 underprivileged children in Magic Bus programme and put them on a path out of poverty. Hardwell is opening up his guestlist, and we hope to make history, once again.”