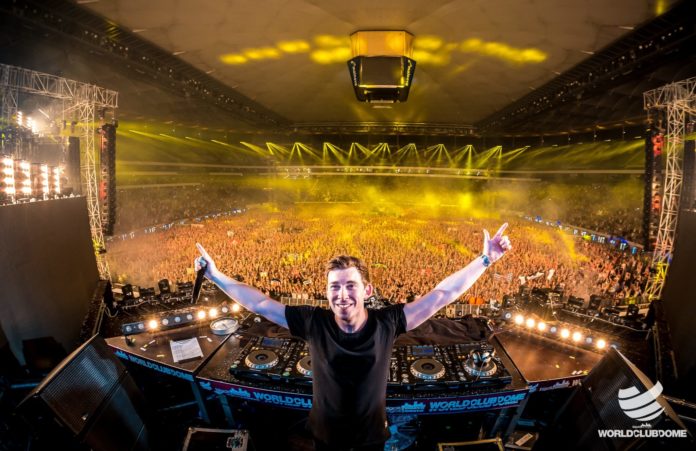 At 11.30 pm on Sunday the “biggest club in the world” closed its doors for another year – after a meltdown set by Hardwell, two-times world No.1 DJ, and the festival finale that came immediately afterwards.

500 fans were flown to the event in the BigCityBeats Boeing 747 from Paris, London and Hamburg and treated to music at first hand – played on the plane by Robin Schulz and Gestört aber Geil. With Kill The Buzz working the turntables, 400 World Clubbers travelled from Paris on the ICE Club Train to the BigCityBeats station right outside the stadium.

The first highlight was Armin van Buuren, who got the entire crowd jumping. And when David Guetta stepped onto the Main Stage there was no holding back. 35,000 fans on the main floor partied to the premiere of his official electro anthem, “This One’s For You’, and his gigantic set. “BigCityBeats, Germany: I love you”, yelled the French superstar into the microphone at the end.

The sets by Lost Frequencies, Robin Schulz, Dimitri Vegas & Like Mike and Steve Aoki represented the highlights of the second day. The Q-Dance stage also made its debut at the WORLD CLUB DOME.

On the final day it was the turn of W&W, Felix Jaehn, Martin Garrix and Hardwell to bring the Main Floor to fever pitch. Only a short-lived gust of wind and a half-hour rain shower dampened the proceedings for a while and led to Sven Väth’s set being cancelled the day after Solomun and Diynamic Showcase opened the WCD Pool Sessions in the local Stadionbad swimming baths.

Hardwell’s set kicked off with a sensational announcement. In front of over 40,000 fans the Dutch star DJ announced the BigCityBeats Virtual World Club Dome with the I Am Hardwell – United We Are world tour finale on 27th August 2016 at the Hockenheimring. There was no holding the fans after that. Hardwell delivered a set that put the crowd in ecstasy.

That supreme DJ-ing spectacle was followed immediately by the blockbuster closing show, which set the sky over Frankfurt on fire. Under the slogan of “Peace” Le Shuuk presented the 2016 BigCityBeats WORLD CLUB DOME anthem.

Councillor Markus Frank, patron of the event and Head of Business for the City of Frankfurt, is pleased that the event is becoming an established fixture in Frankfurt am Main: “We’ve already got a raft of major music events that are international in scope, and the BigCityBeats WORLD CLUB DOME with its huge line-up of electronic-music world stars now transforms the Commerzbank Arena into the biggest club in the world on an annual basis. It’s amazing and jells perfectly with our city and its more recent musical history. After all, Frankfurt is the legendary birthplace of electronic music, and the venues of the Frankfurt club scene with their famous DJs were addresses that were known around the world. I would like to thank the local organisers, Bernd and Carina Breiter, and the many other people involved, whose energy and commitment have once again made the fourth club music festival in Frankfurt am Main an unforgettable event for everyone.”

And fans can already start gearing for the 2017 edition of the BigCityBeats WORLD CLUB DOME 2017, scheduled for 2nd to 4th June 2017. But no one has to wait that long. The next BigCityBeats event is already in the starting blocks. ‘UNITE – The Mirror To Tomorrowland’ in the Veltins-Arena in Gelsenkirchen is set for 23rd July 2016.