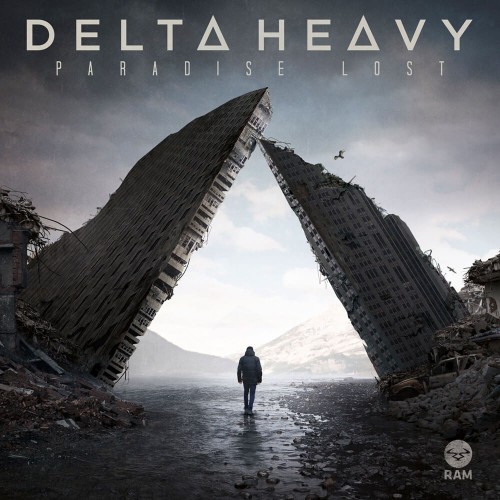 British duo Delta Heavy are finally ready to add an album to their impressive catalogue of music thumpers.

Released on the 18th of March on RAM Records, entitled “Paradise Lost”, the album showcases a slightly different sound of the duo we have come to know. The album has some amazing songs and some not so impressive songs. Overall it is a decent debut album and the guys should be proud. So let’s take a closer look at each track.

The opening track introduces a “Paradise Lost”, beautiful and enchanting. A cinematic orchestra of sound cascades into our minds, transporting us to the lost paradise of our dreams. Approximately at 1:31, things take a turn and we start to dance. I love the 180 turn the song took, setting the tone of the album really well with its theme. The space-like synths reminds me somewhat of Nero’s productions, a different spin on what we are used to from Delta Heavy.

“Event Horizon” comes in next. The space extravaganza tune. The futuristic vibes of this song let’s you fly to the moon and then just to float in bass.

Next up is my favourite track of the album – “City Of Dreams”. Aww man a rush of nostalgic memories came back to me. I know I’m abit bias in saying this but I can’t help it. The song structure and reese bass reminded me of the DnB tracks produced back in 2010/11. This song made me dance and flow into a different dimension. It sounds fresh now simply because I don’t hear a lot of songs like this one right now. Thank You Delta Heavy for producing this song.

“White Flag” comes in as the 4th tune. This tune is perfect for radio play but is equally good in the club. Its got a cool liquidy feel coupled with beautiful vocals.

“Punish My Love” comes in next. Things are turned around into a house track. Yeah, a future house track. Didn’t expect that from Delta Heavy but as artists they have decided to dip their feet into other genres. I was pleasantly surprised.

A subtle off-tune melody starts of “Limbo” off. Its so chill. But not falling asleep chill, I just mean its not as intense although you can definitely jam to it.

Carrying on with the spacey vibes, “Pathways” continues. It sounds slightly similar to “Event Horizon”. It makes you feel like you’re partying in a space station overlooking earth.

The creaky door opens into “Tremors”. Edgier drum and bass tune which gives off a halloween themed vibe with the vocal sample used on the track. I guess the ghouls and ghosts of the night also need a paradise of their own.

“Conquer The Galaxy” comes in next as a electro house track. So much energy, I really enjoyed this one. It also has some futuristic space vibes keeping you on your toes. I actually prefer Delta Heavy doing more of this kind of house music than the future house bits. They have done this tune really well.

“Oscillator” is the heaviest song of the album. As you might have guessed, the song has an array of uniquely different sounds. But its absolutely epic and is a killer.

“Ascending” is up next. If you close your eyes and listen to this song you will feel yourself lifting into another galaxy. Bringing us to the last part of the album.

“Reborn” shows off a beautiful guitar melody with subtle pads and soft hats, followed by amazing female vocals. A great tune that works well in the mainstream but isn’t cheesy. A good balance between the softer breakdowns, energetic build-ups and the edgy bass filled drops.

Electric guitar synth riff gives off a daft punk feel at the start of “Cut Me”. Drum and bass Club track that delivers its purpose which is to make you dance. This isn’t one of the best songs of the album nonetheless it isn’t a bad song. I do however love the reese of this song.

The last track of the album is “Ghost”. My gosh its a beautiful song, starting off on the get go with sultry vocals. The hook draws you in with the bassline and build-up. Followed by the drop, we’re already dancing feeling the song through our bones. In my opinion one of the Monster tracks of the album. The perfect song to end off Delta Heavy’s debut album.

“Paradise Lost” is a mixed bag of music for the tastes of a great number of people. Delta Heavy have clearly explored other avenues of sound in this album and we do appreciate that as listeners. So support them and grab a copy.

You can listen to the album here.