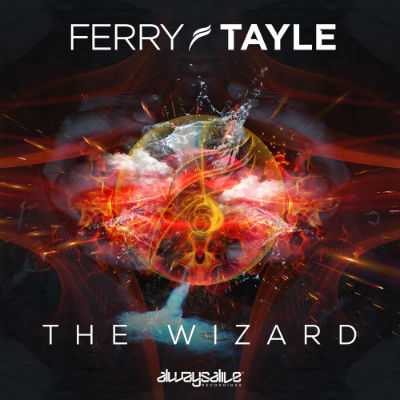 Through his music and DJ performances, he has left an indelible mark on the world’s most enlightened, uplifted and energetically minded club & festival floors. Having rocked the legendary Trance Energy in 2010 he was christened ‘the French Wizard’ by ID&T bosses and it’s a label that’s endured. Now Ferry Tayle returns to again do justice to the tag with the follow up to his ‘Carnet De Vol’ debut.

Through the sonic-stage of ‘The Wizard’, Ludovic Meyer brings another astounding collection of tracks to the fore. Featuring frisson-thrill collaborations with studio likeminds Daniel Kandi, Driftmoon, Suncatcher and Karybde & Scylla, it also includes vocal performances from accomplished songstresses like Hannah Ray, Poppy, Sarah Shields, Erica Curran and others. Together, Always Alive, Enhanced Music and Ferry Tayle are delighted to bring you the album that is primed & match-set to soundtrack your summer end to end…

With an astonishing auditory display of studio-sourced sorcery, the man who puts the Trance into France is back!! Through its choralizing pads, dramatic, symphonic drums and juxtaposing piano chime, fittingly titled sign-in track ‘Let The Magic Happen’ serves a precedent-setting overture to the album.

Having already bagged a DJ Mag Single of the Month, ‘The Way Back Home’ features vocalist Poppy’s “straight-from-the-heart verses & chorus”, which at the break’s apex “sees the lightning conclusively hit the tree” (says the Mag). Picking up-tempo and tone at pace, ‘Geometrix’ sees Ferry team up with Finnish/Slovak pairing Driftmoon, delivering the first of its big slam-the-brakes euphoric moments!

From there the album sequences into a solid block of Tayle-trax, which shows the Frenchman at his full-force, solo mode, floor-wowing best. ‘Metamorphosis’ re-channels the epic sonic ethic of Armin’s ‘Blue Fear’, while the violin-soaked (jaw)drop of ‘Glorious Deception’ brings grand orchestral aura to ‘The Wizard’s tracklist. His new album-built 2014 revision of ‘Trapeze’ meanwhile searches the studio’s soundbanks, locating lucent, sophisticated pads & highly original FX, which Ferry spins into complex, cultured sequences.

On making ‘The Wizard’, Ferry says: “It took me 4 years to accomplish my brand new album and I really tried to make it a full story, from ‘Let The Magic Happen’ through to ‘The Wizard’. As some of you may spot, a lot of the album tracks titles are actually the names of real magic tricks!

It gave me the chance to work with some amazing people like Stonevalley, Daniel Kandi, Karybde & Scylla, Suncatcher & my buddies from Driftmoon. Beside this, it gave me the chance to highlights some forthcoming talents like Ludovic H who is a brilliant musician (he played the piano on ‘The Most Important Things’), Sarah Shields and Poppy. It was a real adventure & achievement for me – I hope you will enjoy this journey throughout The Wizard’s 16 tracks.”

‘The Wizard’ is every bit as much at home on vocal territory as it is instrumental. Sarah Shields brings it one of its most daytime radio friendly moments with ‘The Most Important Thing’, while Ferry catches Hannah Ray in introspective mood on the doucement elegance of ‘Memory Of Me’. Erica Curran adds a wistful hazy vocal-vogue to the of-late smash single ‘Rescue Me’, before muse Poppy returns for her second appearance on the album. ‘The One I’ll Never Be’ has Ferry dropping out the beats & bass, and working around a core of contemplative piano lines and Poppy’s sweetly elegiac lyrical pathos.

As Ferry’s second long-player moves into its concluding third, the Frenchman rallies some of his fellow countrymen composers to ‘The Wizard’s cause. Respectively, on ‘Glittering Of Hope’ and ‘Battle Of The Barrels’, Ferry teams with Sébastien ‘Karybde’ Henri & Laurent ‘Scylla’ Roux and Oliver ‘Stonevalley’ Picart, betting against gravity with two huge rocketeer-ing instrumental numbers. Every bit as uplifting are ‘Flying Blue’ and ‘Origami’, which have him sharing studio time & space with fellow Enhanced Recordings cohorts Daniel Kandi and Suncatcher.

‘The Wizard’ wouldn’t be ‘The Wizard’ without its eponymous title track. Using it as the album’s fanfare conclusion, the track is a masterclass in beat-free, air-drawn orchestral strings, super-atmospheric ambient FX and pianoforte magic. The calm after the storm, it gives ‘The Wizard’ the most memorable of dénouements.

Check out the album previews below!