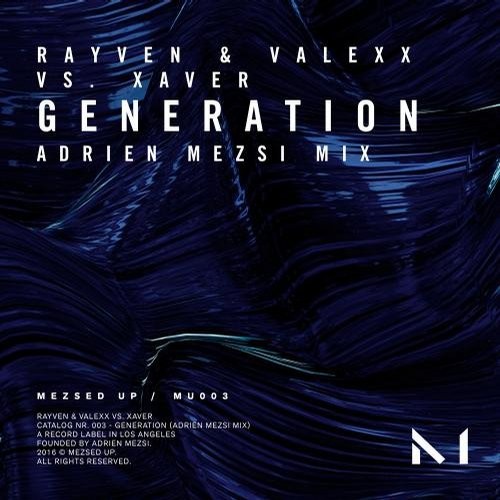 Having established themselves as one of the scenes fastest rising duos, Rayven & Valexx have teamed up with fellow Italian producer Xaver to produce Generation, which is out now via L.A. hotshot Adrien Meszis imprint, Mezsed Up Records.

Since exploding onto the scene Rayven & Valexx have become one of Italys major acts, thanks to their impressive production skills and release catalogue. Having recently remixed Stadiumx and Delaney Janes hit single Time Is On Your Side on Armada Music and releasing hit singles on Flamingo Recordings, Showland Records, Big & Dirty and John Dahlbacks Mutants imprint, the tandem have gained support from industry tastemakers like: David Guetta, Axwell /\ Ingrosso, Afrojack, Martin Garrix, Nicky Romero, R3hab, Thomas Gold along the way.

Their collaborator Xaver is no stranger to success either, thanks to his top-notch releases on labels such as: Void Records and Vicious Records. Tiesto, Steve Angello (BBC Radio 1 Residency radio play), Sick Individuals and Max Vangeli are just a few A-list names that have been supported his work; firmly cementing his place alongside the scenes most promising talents.

Holding powerful drums, a filthy yet groovy bass-line, euphoric chords and razor synths, Generation is everything you would expect from these fast rising stars – making this Electro infused Progressive anthem perfect for any club or festival mainstage. Generation has already landed the thumbs up from heavyweight artists all around the globe and is a must for any DJs record collection.

Label boss Adrien Mezsi jumped at the chance to sign Generation to his newly formed record label Mezsed Up, which will see Rayven & Valexx and Xaver join artists such as: Noizy Mark, MAD2MAD, Dujak and the label boss himself on the imprints already impressive roster. Generation looks set to follow the imprints previous releases into the Beatport Top 100 charts and make 2016 an impressive year for both artists and label.