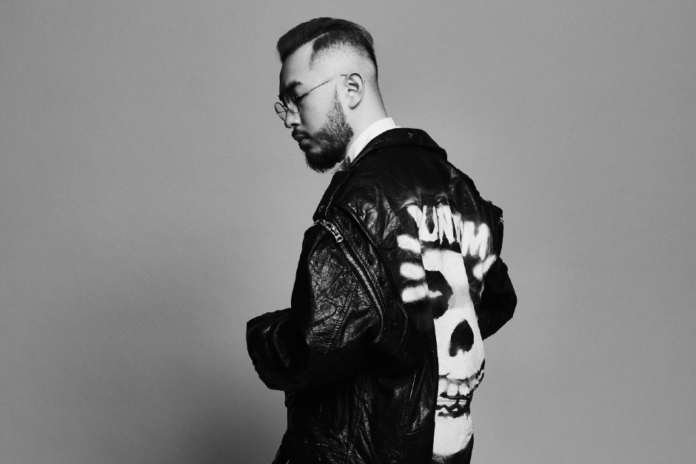 ‘Crying for the moon’ is the debut EP from Japanese multi-instrumentist: Cold Faith.

A hyper-modern project, without concession, deep and anchored in our daily lives. A materialization of his emotions faces the evolutions of our world. The result is raw, dark and it takes guts. It’s impossible to remain indifferent while listening to this first EP. ‘Crying for the moon’ is an ambitious project and Cold Faith offers us a unique artistic vision.

We caught up with the artist to understand how the EP came about, and what it stands for.

T.H.E – Hey man! Welcome to T.H.E – Music Essentials. How has 2020 been for you, what with the lockdown and everything?

Cold Faith – Nice to e-meet you. Thank you very much for giving me this valuable opportunity!

Well…to put it briefly, the year 2020 wasn’t that a good year for me. COVID19 made the first half of 2020 an unexpected year for me. As for the second half of the year, I am not very surprised, as the prevalence of COVID19 was predicted again in northern hemisphere countries as early as September.

Human beings can’t outweigh the power of nature but should be able to get along with it well. I sincerely hope that the time that has stopped because of this new virus, which is a threat to mankind, will be a valuable time to reconsider today’s difficult human problems and make the future a better world.

T.H.E – We had a chance to explore your new EP and absolutely loved it! How did it come about and what does the title signify?

Cold Faith – In the year I wrote these tracks, I heard through the news about the sad problems of kidnapping and trafficking of girls by Bokoharam and the issue of the Rohingya refugees. As an artist, I thought it necessary to reconsider whether these actions and coping methods are moral and truly correct for mankind.

Taking these into account, I have attempted to raise questions by creating and releasing songs “Crying For The Moon” and “Arachne And Narcissus”.

Even if I lost the valuable fan of The Theory For Our Revenge by releasing the two tracks, I felt that it was our mission to release them. I feel that racial, gender and religious issues have certainly worsened this year compared to the time I created the songs. So I feel that the release of this EP was not a mistake.

“Crying For The Moon” is one of the customary phrases in English-speaking countries, representing a desire for something that he or she does not possess and is absolutely unavailable. I did not hesitate to make this tight phrase the titles of this EP and the lead track. And immediately it was decided.

T.H.E – This also happens to be your debut EP, what made this the right time to release one?

Cold Faith – I was planning to release this EP as the First EP for The Theory for Our Revenge in the second half of 2019. In the spring of 2019, when Jhas entered the final phase of becoming a healthcare worker, he had to leave the project, and I decided to release this EP in my solo artist name. In the summer of 2019, I formally signed and contracted with a famous record label in Hamburg each other, but in autumn their unilateral defaults made it impossible to legally release this EP within 2019. After my lawyer had them return the copyrights for all the tracks to me in March 2020, I thought to figure out when and from which record label this EP should be released. Since a seasonal word of the Japanese song of Kakinomoto No Hitomaro used in the Intro of the track, Crying For The Moon was in the autumn of Japan at that time, i.e. in July-August of the modern era, it was decided that it would be best to release the songs in the first fall of the year, and the song would be released in August on a self-release basis.

T.H.E – The lockdown definitely must have resulted in an increased amount of studio time. Did you find that to be helpful while preparing this EP?

Cold Faith – I changed the mastering of the songs contained in this EP from a German engineer to a Japanese engineer and asked to do it again. However, as I had completed the production of these songs in August 2019, COVID19 had little impact on the production of the recorded songs. Therefore, the lockdown was not useful in producing this EP.

T.H.E – What sounds or artists influenced you while you were creating the EP?

Cold Faith – In this EP production, I incorporated the visuals of 80 to 90S cyberpunk cartoons such as 3×3 EYES and AKIRA as part of the image source. However, because my music has a strong experimental element, there are no musicians affecting this EP production, and there is no sound for reference.

T.H.E – How many tracks didn’t make the cut, and how long has it been in the works?

Cold Faith – I cut a few tracks that were created only for release from the record label in Hamburg this time. But I like the sound phrases and lyrics for a few of them, so I’m going to remake them and release them. I think the production period was about four months in total.

T.H.E – The EP doesn’t feature any other collaborator, was that a conscious call?

Cold Faith – From a commercial point of view, I think it was certainly more effective to work with other singers and musicians. However, in order to realize my own image more, I thought it would be better for me to produce the songs by myself than collaborate with other musicians. Instead, I collaborated with a fine artist, Johan Barios, one of the famous photographer in Japan and U.K, Hirohisa Nakano, a Japanese new mode brand, PUNKTUM, and a shooting team in Berlin, SHUTO CREW to better image the tracks in this EP. As a result, their artwork made this EP thicker. I am grateful to have met them and to everyone who worked on this release.

T.H.E – Could you tell us a little bit about each track, how it came about, and what does the title signify?

“Crying For The Moon”

I decided to create this track focusing on human beings’ stupidity.

I can’t stand the inhuman acts that are happening in the world like schoolgirls kidnapping by Boko Haram in Nigeria, human trade and so on. I feel strong anger toward these matters and this is like our antiwar track.

For this track, we are only thinking about presenting the world problems to the listeners.

I am hoping that people will listen to this track, read the lyrics and make some happens, what else could I ask for. But of course, I will be too arrogant if I ask for everything.

Having the people who live in a world with their lives connected to sad religious commandments to understand this message is not easy. A long time will be needed. But still, they can listen to this track and take a moment to rethink if the current occurrence is justice or not.

If they do that, I can say that our mission for this project is a success. For the lead sound, I have implied the message that I mentioned above. But, I don’t want people to be focusing too much on the lyrics.

So, I intentionally made it simple and to loop. I also aimed so that when people listen to this track repeatedly, the melody will stick to their minds causing like Pavlov’s dog effect or like a placebo effect.

Of course, I added our experimental trademark essence, but completed the track keeping a balance so that it is approachable. The visual image of this track is from dawn to sunrise, and young African girls who are wearing colourful ethnic costumes are holding and listening to the deteriorated, beaten-up tape players (Walkman) or CD players (CD Walkman) which have become a retro technology even in savanna area.
As the young women are crying and dancing putting all their energy into it, their scarves are waving in the air and the metallic sound from their accessories can also be heard.

If you could imagine a scene something like this, that would be great! I also intentionally wrote the lyrics indirectly, so, unless the listeners read the lyrics over and over, they will not know that this track is an antiwar track. This is my aim, too.

I might have explained to you about this track, but let me explain again. I got the image for this track from Rohingya refugees and inspiration from Stanley Kubrickʼs “A Clockwork Orange” film. We can control peopleʼs flesh but canʼt overpower peopleʼs soul. This can be seen in Kubrickʼs film, as the experimenter couldnʼt control the subjectʼs mind and soul. This links to Rohingya refugee problem as well. I also came across news saying that some countries decided not to support childrenʼs education and their lives. As one human being hoping to make a better world for children in the world, I strongly believe that we need to release this track to send out the message.

This track is about “close people praying for the revival of a hopeless person”. The hopeless person wants to and thinks that he can be successful, but actually, he doesnʼt put any effort in his actions. When he sees others praying for him, he is fed up with the same scene and doesnʼt want to hear them or see them again.

About elements, for the 1st main chorus, I intentionally reduced the sound level making it feel like the hopeless person is not trying to listen to the prayers. The noise used in the track makes the hopeless personʼs mind not being clear and distracting him from listening to the prayers. For the 2nd main chorus, the sound is a little clearer, because I want the listeners to understand the lyrics and know that others are praying for him. For the beat, I added some Japanese samurai elements.

The Japanese word, OBORO means that it seems to be obscure and unclear. I expressed Japonism, Midnight Tokyo, violence and delicacy hidden within ourselves in this track.

Our art project, The Theory For Our Revenge(Ig account: @the_theory_for_our_revenge) already released the track last year. But this time I remixed the track for releasing my début EP as a solo project, COLD FAITH.

Cold Faith – Although it may change depending on the spread of COVID19, I want to release songs that listeners can purely enjoy as music in a form of EP or albums. I also think I want to offer music to rappers, etc.