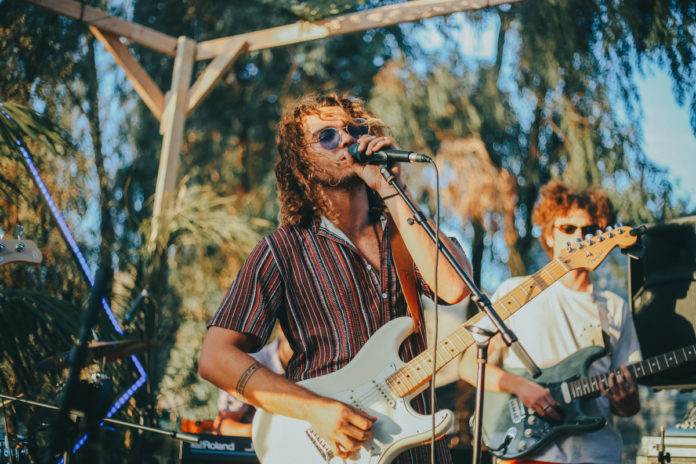 Dante Marino who has paved his own path in rock with his unique blend of indie rock and reggae flavours, shares his latest single, ‘Peace of Mind’ a beautiful track that makes you headbang along to the backing track whilst you also fantasize about being on a beach on holiday at the same time.

To celebrate the release of this track, we caught up with him to learn more about “Peace Of Mind” came about, his creative process and more.

Aditya – Hey Dante Marino, Welcome to this edition of T.H.E – Interviews! How’s 2021 been for you so far?

Dante Marino – Great thank you, happy that live music is starting to come back to life.

Aditya – ‘Peace of Mind’ being a rock song, sounds really soothing to ears! Could you tell us about the track?

Dante Marino- Thanks ya I definitely have most of my influences in 60s and 70s classic rock but also got very into reggae/indie later on which is probably where the “soothing” sound you’re referring to comes from.

Aditya – What’s your creative process like? Do you begin writing on Guitar?

Dante Marino- Yes I almost always start with just an acoustic guitar. The guitar is where I feel most at home and where ideas naturally come out. I’ll usually find an idea of a riff or chord progression that feels right and then just freestyle vocally until I find a melody and words that are fitting. Sometimes, if I have something lyrically that I am feeling inspired to write about, I’ll start with words and then find music for it but I’m usually a music first type of writer.

Aditya – The artwork looks magnificent! Could you tell us about the idea behind it?

Dante Marino – Thanks so much, my friends Ceca Radl and Shane McCartney helped me create this and I’m super happy with how it turned out. The images aren’t necessarily symbolic to any specific type of event or idea, they’re more so just pieces that hold meaning to me in a personal way and make me feel inspired. For example, the sanskrit around the sides holds meaning to me. It spells out a song that was sung to me before I was born and throughout my childhood, called the Gayatri Mantra. Other pieces, like the moon-headed guitarist just look fucking cool.

Aditya – I’d like to know more about your band members.

Dante Marino – I perforform with Wes Bourne (Bass) Noah Maytorena (Drums) and Matt Daruty (Keys). They’re all great musicians who I’m super lucky to have met. I met Wes and he mentioned being a musician so we got together to jam and it clicked really well. He introduced me to Noah and we spent probably over a year just casually jamming every now and then until we started performing (partly due to the lockdown). Recently I invited my friend Matt to perform with us as well and it’s super nice to have keys live. We’ll all be hitting the road for our first national tour on the west coast of the US later this year.

Aditya – What’s on your guitar processor/pedal?

Dante Marino – I don’t have too much set up, I like to stay minimal. I have a great MXR reverb pedal, a Canyon delay, a tremolo, and a wah. I owe most of my sound to my amp and cab which is actually Allan Holdsworth’s personal Hughes and Kettner head paired with a Marshall stack. My first teacher, John Murphy, was fortunate enough to inherit this amp from Holdsworth’s family and I was lucky enough to have it passed on to me.

Aditya – If you had zero in on your all-time-favorite rock band, who would that be?

Dante Marino – AC/DC. They played such an important role in my musical development. I was completely obsessed when I was a kid and began learning, AC/DC became my identity and Angus Young was my idol. Led-Zeppelin also has a massive impact on my playing.

Aditya – Tell us about the first gig you’ve played.

Dante Marino – I was 11 the first time I played a gig. It was at a bar/restaurant in Costa Mesa, CA called La Cave. I remember being so nervous and my hands were so sweaty I was afraid the strings would be too slippery to play. Once I was up there and a few songs into it I got more comfortable. A few songs into the set, we played Led-Zeppelin’s “Heartbreaker”, which has a pretty difficult solo. After I played through the solo and saw how stoked everyone was, it all felt very natural from that point on.

Aditya – How does it feel to be living in Hollywood?

Dante Marino – The biggest thing I’m focusing on is the tour I mentioned. It’s my first time doing consecutive shows outside of CA so I’m super excited. I’ve also got lots of new songs I’m working on and hoping to release a new EP around the time the tour starts, which is December 1st.