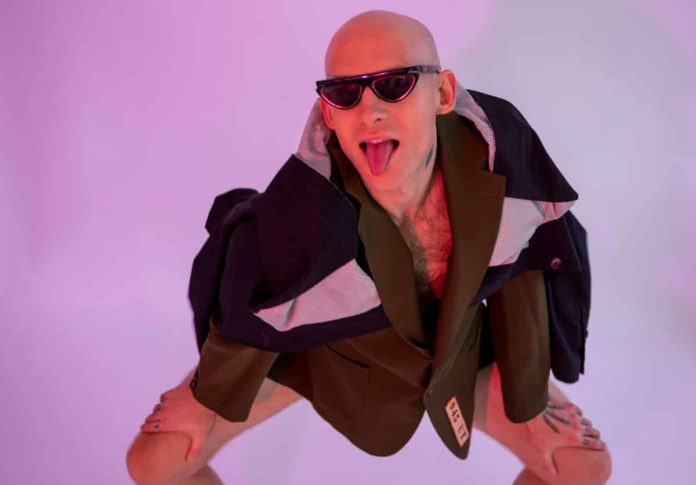 Showcasing GARRETT’s distinctive blend of spoken word, electronic beats and elements of UK garage, ‘BABY’ is a revenge track to your ex in a spiritual sense.

Speaking of the track, GARRETT says, “Essentially, it’s a “look at what you’re missing” song. It’s the vulnerability of giving your all, and taking back your power after all those sleepless nights. It’s the energy of moving on, and standing in your full power in a spiritual and sexual sense. “Look at these lips you used to kiss, these hips you used to dip… look at what you miss.” It’s a feeling-yourself anthem, and a reminder, that it’s them – not you – who’s missing out.”

GARRETT’s sound blend elements of house, dance and electronic music, combined with his raspy vocals and honest lyricism. Having grown up in New York City, GARRETT has been “moaning poetry” into microphones since his teenage years, and brings a soulful energy to his house-infused dance music which contains raw and vulnerable yet conscious lyricism.

We caught up with GARRETT to learn more about how “Baby” came about, his favourite Lesbian love story and more.

Aditiya – Hey! Welcome to this edition of T.H.E – Interviews. How have the past 8 months been for you?

GARRETT PAKNIS – Creative! It’s what’s fueling me… and I’m just trying to get on that “let’s do it all while we can” train!

Aditiya – ‘BABY’ – let’s talk about that. The track sounds exceptional with the elements of UK Garage, could you share some insights on your creative process?

GARRETT PAKNIS – It’s so wild because I wrote BABY five years ago, walking down the street in New York City after heading home from a dance class… I heard the melodies in my head and was just like “YES, this is FIRE” and I felt its spiritual significance for my life. It has seen about 8 versions through the years (none of them currently released)… though I finally feel like I’ve given it the proper justice it needs with this version and won’t be re-working it again.

Aditiya – To the listeners, what’s your message behind the track ‘Baby’?

GARRETT PAKNIS – It’s essentially a “feeling myself after a shitty breakup song”, and a sort of soulful revenge of… ‘look at what you’re missing, boy’. It’s claiming your power and identity after someone you trusted tried to take it from you.

Aditiya – The music video is really vibrant and has its own visual identity, could you shed some light on the creative direction of the video?

GARRETT PAKNIS – I have been working with these amazing Berlin based animation artists, and I wanted to take clips of me back in New York and meld them into a futuristic and vibrant way. I really love the psychedelia of it all, and since my art is meant to make people feel both wild and free, I wanted the visual to speak to that. Take them on a trip… just like the relationship I’m speaking about.

Aditiya – You certainly have an eye for aesthetics, could you tell us about your fashion?

GARRETT PAKNIS – It’s something that I’ve always been drawn to… in high school, I even won “best dressed”… you know, for the yearbook awards? So stupid, but all these years later… it’s really a big part of my identity. Everything has to have a function and feel like it’s part of *me*… no “performance” or other character, even when I’m wearing a crazy outfit on stage.

I think fashion and the way we represent ourselves is so important, especially in a world that will identify you at first glance. We may as well take ownership of that narrative, since often, people will say whatever it is they want about us and it may not even be true.

Aditiya – Tell us about your favorite LGBTQ+ Movies, Series, Books, Plays, Music, Painting, or something that have resonated with you being a queer artist?

GARRETT PAKNIS – I fell in love wiith this lesbian love story ‘My Summer of Love’ when I saw it playing in cinemas 17 years ago. It was so tender, and I knew I wanted to make art that touched that same part of people. I also grew up very much into ‘Queer As Folk’ (the American version) as a teenager in New York… that series changed so much for the community. It opened my eyes to the world around me… even though I was in New York, I had no idea of ‘the scene’, but boy, did I find out!

Aditiya – The world needs more LGBTQ+ and Trans Art, can you share your comments on that?

GARRETT PAKNIS – When people see something beautiful made by a queer artist, they can identify with it from the deepest level, and perhaps become less afraid of what that person “is” and more interested, rather, in *who* that person is on a human level. This helps equalize the playing field, and connects us all as humans.

It comes down to the simple truth that the world needs more representation of what the world represents. Just because 5 straight white dudes run the world on a commerce scale, doesn’t mean that’s who consumers are. And I believe that’s changing… and has changed, even, but I say it to make a point. We are a global community, but we can forget this.

Aditiya – New York, also known as Mecca of Jazz artists, How do you feel about growing up there?

GARRETT PAKNIS – I always felt the electricity that “anything could happen, on any given day”. It was where people flocked to, to accomplish their dreams. When I started modeling at 15, I was hanging with an older crew… and I thought… wow, the entire world is my oyster. I knew I could do anything I wanted, and there was a freedom in the air. Everyone was someone, and I was someone too. That freedom and confidence has lasted with me to this day, and is why I feel so comfortable just packing up my bags and heading out on my next life adventure (I lived in Berlin for two years before London, and lived in Asia and Bali for a while before that).

Aditiya – What can we expect from you in the coming months?

GARRETT PAKNIS – The best music I’ve ever made. Next up is a cool “summer in NYC-nostalgia track” – called ‘EASY TO LOVE’ – and then I have a really special song called ‘BAD BEHAVIOR’ that is a total earworm.

Then an incredibly cool track ‘YOU LIKE IT’ which has the powerhouse disco diva voice of my friend Charlene Lite on it. We’ve been wanting to collaborate for years and it’s finally happening!

GARRETT PAKNIS – I’m a Taurus with my moon AND my rising in Cancer. So I’m super sensitive and creative, but I have that grounded and relaxed (and sensual and stubborn!) energy of Taurus. Boom!