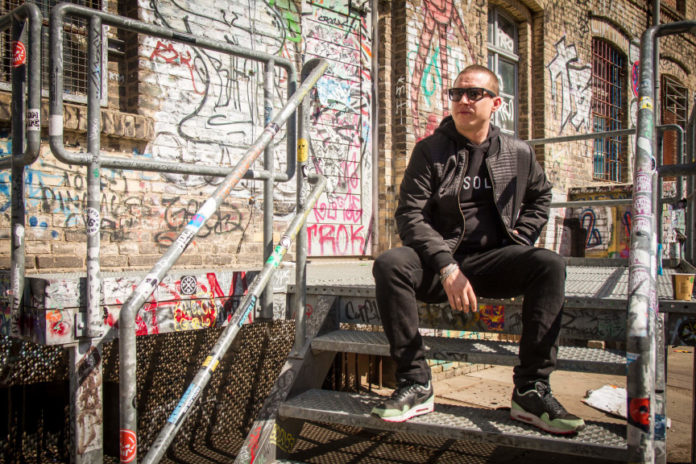 It all began at the end of the 90s in one of the oldest techno clubs of Europe: Airport in Wuerzburg. His roots are Golden Age Hip Hop but he decided to change to electronic music soon. A lot has happened since then. Nowadays the Berlin DJ and producer, AGENT! is touring nonstop around the globe to show his unique skills.

Whether in Korea, China, Thailand, USA or in Europe – his operation areas are international. He is playing at well-known locations like FABRIC and THE EGG London, WOMB Tokyo, ZOUK Kuala Lumpur, PACHA and PRIVILEGE Ibiza, WEEKEND and KATER BLAU Berlin, PRATERSAUNA Vienna, IL MURETTO Jesolo & former COCOON CLUB in Frankfurt. Inspired of his Hip Hop roots, old Funk and 90’s techno music, he began producing his own music in 2008. Because of this influences he creates a special sound. Releases on Labels like COCOON REC., DESOLAT, MOON HARBOUR, HEINZ MUSIC / BRISE, SUARA, KLING KLONG, HÖHENREGLER and more speak for his producer qualities. His tracks reflect the way of mind and AGENT! himself. His famous track „Work it“ on Moon Harbour reached the Top 3 of the Beatport Tech House Charts and is one of the most sold releases on Matthias Tanzmann’s imprint.

“Music is good when it’s good”. Faithful to this ideology, AGENT! can’t be thrown in a concrete genre. In his sets he combines several styles with his special way of mixing.

Check out our chat below where AGENT! talks about his trip to India last year, playing gigs every weekend and plenty more! :)

T.H.E – You are playing gigs every weekend from Mexico to Thailand – How has the last months been for you?

AGENT! – I had a great time, I have been to sunny countries like Brazil, India, Dominican Republic, Mexico and Thailand. I am not a big fan of snow and minus degrees so I always change the cold Berlin winter against sun, beach and the sea. I played amazing shows in locations such us D-Edge in Sao Paulo, Vibe Club in Punta Cana, Cha Cha Moon on Koh Samui Island and much more. All of them were pretty intense.

T.H.E – You also toured India last year. How was that experience?

AGENT! – It was super nice. Most of the time I’ve been to Goa. I played there at one of the top parties called “soma project” And a few others. Super stylish people and venues.

T.H.E – In terms of food, what is your favorite city or area in India to visit while on tour?

AGENT! – Of course you should try The Various curries. I love the goan style. It’s more spicy but yummy. And don’t forget to eat all the tropical fruits like passion fruit and Tamarind.

T.H.E – If you could change anything about your job as a DJ & producer, what would it be?

AGENT! – Oh yes I would like to “beam” myself to all my gigs. In that way I could avoid the long travels each weekend ;) Just joking. I really love my what I do and so there is actually nothing I would like to change regarding my job. If there is something I would like to change it would be the respect which people show in these scene towards each other. I put a lot of passion and energy in my work, as well as a lot of other artist do. My vision is that people realize how much blood and sweat is putted in the underground scene.

T.H.E – You are definitely a passionate DJ, often working with three decks. How has it come to this?

AGENT! – I started my DJ career with Hip Hop Music. I know how to scratch, backspin and beat juggle. After some years as a Hip Hop DJ I changed to electronic music and of course I took those skills with me. During my set I have my hands all the time on the faders, buttons and vinyl’s. I need action during my set, I get bored just to make an easy transmission, I always add some acapella, extra beats or fx in my sets. This is the origin of using 3 decks. I think in these days you can be a DJ without it but it is really a big advantage to know the old-school turntablism skills and know how to use the technique. You hear the difference :)

T.H.E – You are mixing different styles like techno, tech house & house with a nuance of funky vocals into one pumping’ mix session. What do you think makes a mix really interesting?

AGENT! – Basically I got my signature sound, which goes in a pumping and energetic direction, but it is important for me that the music fits to the atmosphere and the location. So my set is also always developed in symbiosis with the crowd and it is building up during the night. I am consciously searching for unknown tracks and sounds, I love to use underground classics and of course I play or test some promo tracks but there is never a prefabricated track list. The use of samples and vocals happens also very spontaneously and is popping out of the situation. I need those spontaneously reaction in the night – I really cannot image a complete prefabricated set. And I think those reactions and the resulting artistic freedom make my sets soulful and interesting. Expect the unexpected.

T.H.E – Your latest release is on legendary get physical – can you dig it ;) ?

AGENT! – Yes I Dig it ! ;) – The expression originated from the Gaelic “tigim”, meaning I understand. “Do you understand?” would translate into Gaelic as “An dtigann tu?” which is pronounced “un diggin too?” Hence “do you dig?” So, do you dig?

T.H.E – How would you describe the sound of the release at all?

AGENT! – Old-school vs New School Flavour. I grew up in the 90s and so I am very much influenced by Golden Age Hip Hop, Funk music, Videogames, Cult Movies and Graffiti. All 4 tracks of the “Can U Dig It EP” are a mixture of those impulses. The title track “Can U Dig It” includes a lot of sounds from deep till pumping: 303 Acid Line and distorted bass. “Southside Berlin” continues with the same intentions, lifting you up with the percussion and holding you with the music. The Dub mix includes emphasizes and strengthens this, boosting the energy and increasing the focus on the groove. The final piece “Can’t Stop” lowers the lights and darkens the mood, creating a beautifully rhythmic atmosphere. For super late sessions and the handful of dancefloor-veterans still pushing on.

T.H.E – Have you ever imagined doing something else than music?

AGENT! – I did an apprenticeship as a media designer and I used to work in my job for a long time. I am still creating some different images and ideas. But music always was my first choice even when it was hard in the beginning. For the moment I cannot imagine doing anything without music.

AGENT! – I will be in Europe in the next month. I will play gigs at great locations in Madrid, Lisbon, Prague, Hamburg, London and Berlin. My open air season will start in May with the great „Grüne Sonne Open Air“ in Germany. Of course I also will spend a lot of time in my studio and prepare some new bangers for you. But I am addicted to the beaches so I will be in South America again in June. I hope to visit your country this summer too.