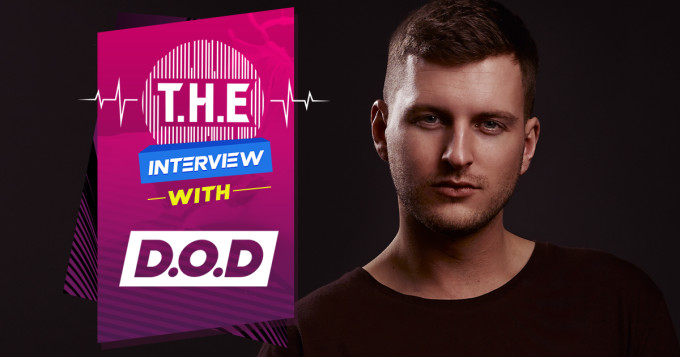 It’s easy to see why D.O.D is fast becoming one of the most respected Electro House DJs and producers.

Originally discovered as an ahead-of-the-game local DJ by Mixmag, whose editor Nick Stevenson declared, ‘D.O.D is one of the most talented young DJs and producers we’ve discovered this century. Expect big things.’ D.O.D has since released music on some the world’s most established labels such as Spinnin’, Laidback Luke’s Mixmash, Steve Aoki’s Dim Mak, Bingoplayers’ Hysteria Records and Dyro s WOLV.

We managed to catch up with Dan and speak to him about his recent collaboration with Duckworth Sound, ‘Blow Up’. Read our chat below.

T.H.E – Hey Dan, thanks for taking the time out for this interview! What have you been upto?

D.O.D – No problem! I’ve just been really busy in the studio recently working on a new sound. Times have really changed over the past 12 months and I’m just trying to make sure I’m one step ahead of everyone. I’ve also been touring lots recently, mainly in the states. The shows have been great this summer!

T.H.E – Your collab with Duckworth Sound, ‘Blow Up’ was recently released on Hysteria Records. How did this collab come about?

D.O.D – So Luke (Duckworthsound) sent me an idea a while back now and I really loved the percussive element of the drop that he did. I emailed him back straight away and asked if he wanted to work on it as a collaboration and he agreed. I always have an open minded attitude towards working with artists, no matter how big or small.

D.O.D – I tend not to overthink track names too much, so it’s actually just the vocal sample before the drop. People listening for the first time can remember things like that easily too, so may also go search for it after they’ve heard it at a festival for example.

T.H.E – Could you talk us through the production process for this tune?

D.O.D – I had made the breakdown that’s in the track a few months earlier in an LA hotel room and the two ideas just seemed to gel together nicely. I changed the drums on the drop and the ‘Blow Up’ was born. We never actually met do to the collaboration, I think this is pretty common to be honest. DJs tour so much it’s always super difficult to have both artists in the same city at once.

T.H.E – Is it more difficult or easier when working with another artist(s) as opposed to working solo?

D.O.D – I always find it a little more difficult to be honest. I tend to go in with a finished track when I ask to collaborate. Sometimes you get so used to what you have already done that it can be difficult to change it. But most of the time the other person always does a fantastic job, and the track is brought to the next level.

T.H.E – When collaborating, how do you decide how things go? I imagine there is a bit of compromising involved.

D.O.D – Yes of course there’s always compromising, it’s the only way to do a true collaboration. A lot of the time the artists will just suggest something to each other or go as far as actually doing the idea first and then sending. It’s difficult to picture what’s in the other persons head.

D.O.D – Well I’ve just released another brand new record called ‘Those’ which is out now on Laidback Luke’s Mixmash Records. It’s been getting some great support from the likes of Tommy Trash, Dyro, R3hab, Quintino + More. As I said earlier, I’ve been working super hard on a new sound recently and I have a lot of new records finished, 3 of which will be released before the end of the year which is great! I’m lucky as I have free range of the labels I can release on, I feel it’s important for growing profile.

D.O.D – I’d be a promoter. It’s what I did for a few years before I turned professional producer and DJ. It’s very stressful but the rewards can be amazing if you hit it right with a show!

T.H.E – What would be the 5 things you would definitely carry for a camping adventure to ensure that you have a great time?

D.O.D – A solar powered charger, a portable Bose speaker, a liter of vodka with mixer, an iPhone with music (no signal to call people though) & good friends.

T.H.E – Lastly, your top 5 essential tunes of the moment.

T.H.E – Thanks a ton Dan for taking time out to talk to us here at T.H.E – Music Essentials. It’s been a pleasure!