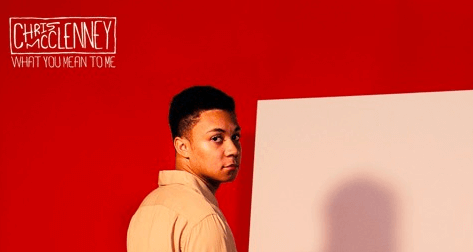 Now one week away from the release of Chris McClenney’s debut full-length solo EP, “Portrait In Two,” the NYC based singer / songwriter, producer, engineer, and multi-instrumentalist has revealed two new singles and two remixes.

On original singles “Otherside” and “Headlines,” listeners got a taste of a project that fuses jazz, R&B, and funk. In addition, the remixes to “Tell Me” and “Pearl” reassured long-standing fans that McClenney’s electronic / dance music roots are still heavily in tact as well.

For our final preview of the EP before it’s release on Friday, January 13th, we’re now being introduced to one final cut from the project- a new single titled “What You Mean To Me.” Invoking vibes of early 2000s R&B, “What You Mean To Me” is a bass-heavy ballad accentuated with piano chords and a serenade from McClenney. As the last sneak-peek into the project, “What You Mean To Me” exemplifies the ethos of the EP that features all music produced, performed, arranged, and mixed solely by McClenney. With seven new tracks still remaining on the ten-song project, look forward to hearing vocals and a myriad of instruments that include piano, keyboards, bass guitar, electric guitar, drums/percussion, clarinet, and drum programming.

For those unfamiliar with McClenney, the 23-year-old artist has already established a reputation as an in-demand producer/DJ thanks to releases on Soulection, production for artists including D.R.A.M, and virally charting remixes. To date, the “Portrait In Two” EP has already received critical praise from taste-making outlets including Fader, KCRW, NEST HQ, DJ Booth, Solange’s Saint Heron, Okayplayer, Mass Appeal, and more.

Still to come, McClenney is also gearing up for the EP’s official release party on January 14th at NYC’s esteemed Blue Note Jazz Club where he will be performing live. Show details and tickets here.