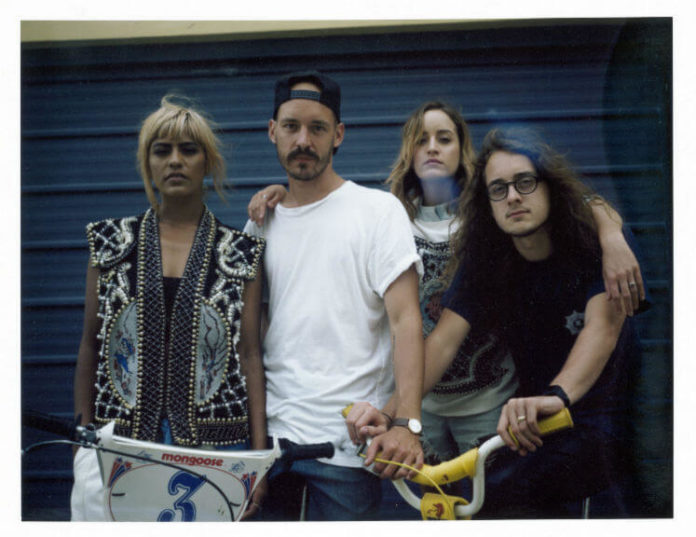 Yesterday, Stereogum premiered their latest track “Make It Real” HERE, writing: “This thing is huge, stretching out quickly like a growth spurt in an unsuspecting teenager. But there are no growing pains or cracked voices here.”

Australia’s Triple J premiered and immediately added to rotation lead single “Lonely Cities” – which reached the top of the Hype Machine charts this week (#1 no remixes + #2 overall) – comparing the band to HAIM and Of Monsters And Men while describing the music as “a safari of sounds… a glorious mix of everything you need on a summer afternoon.” Pigeons & Planes premiered “Lonely Cities” online HERE, and the band broke into 2016 with the premiere of debut offering “Bullet From the Gun” on Zane Lowe + FADER last month HERE.

A family, a band, all together now, Sydney’s Tigertown share a special familial bond. At the band’s core lies husband-wife duo Chris (guitar) and Charlie Collins (lead vox + synth), rounded out by the former’s brother Alexi (keys) and sister Elodie (bass). Already boasting a dedicated following and Triple J support in their native Australia, the band set their sights internationally last year, making their mark as one of the breakout acts of SXSW 2015. The new year finds them touring with St. Lucia and signed to acclaimed tastemaker label Neon Gold (Charli XCX, Christine And The Queens, Marina And The Diamonds, et. al) and Atlantic Records, as they ready their international debut Lonely Cities EP for release February 5th, produced by BØRNS principle collaborator Tommy English.

Editorials Sagar Deshmukh - April 7, 2020
0
Best Drum and Bass Mixes We are music lovers and on a good day, the only thing on our minds is, ‘’When is the next...

featured Akshay Bhanawat - April 7, 2020
0
Arguably one of the most highly-anticipated releases of the year, JOYRYDE’s debut studio album “BRAVE,” arrives via HARD Records. Since emerging in 2016, JOYRYDE has...

EDM News Akshay Bhanawat - April 7, 2020
0
DGTL was supposed to create history on 11 and 12 April 2020 with the first circularly organized festival. Coronavirus threw a spanner in the...

Music Akshay Bhanawat - April 7, 2020
0
American DJ and producer Baddies Only just dropped his third single "I Need You," a modern club banger with a nostalgic element. The track...
ABOUT US
What started as an interest, slowly turned into a passion, and before we knew it, we had curated and founded a thriving community of avid electronic dance music lovers.
FOLLOW US
© Copyright 2020 - T.H.E Music Essentials