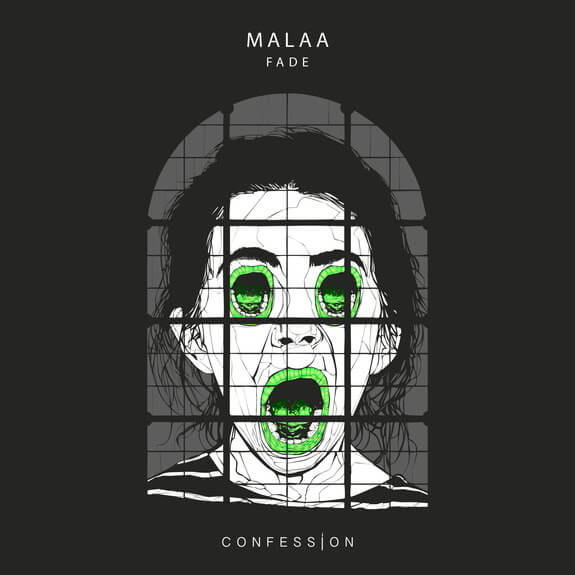 After much anticipation, Tchami’s esteemed Confession imprint has finally unleashed its third record of 2016. Making his return to the label, the enigmatic masked producer Malaa follows up his critically acclaimed track “Notorious” with “Fade”, now available on iTunes.

With a whopping 857k+ Soundcloud plays and counting on “Notorious”, Malaa continues to perfect his skills in layering rap vocals over hard-hitting bass lines, once again scoring a bull’s-eye. The track starts out with a glimpse of the pitched-down vocals sampled from rap legends Kool G and Nas, fully revealed after a foolproof build up of thumping claps and a freaky, circular melody. The vocal climax resolves in a smooth, subtle bass drop, emitting a pulse that keeps going with skillfully inserted hi-hats and snares, establishing “Fade” as an all-time groovy banger.

Although Malaa remains secretive about his identity, he does not hold back in his flawless productions, which will continue to keep dance floors moving for days to come. With a track record like his, he will no doubt establish himself as a key player in the future house movement.

EDM News Akshay Bhanawat - August 5, 2020
0
Electronic music fans may not be flocking to Creamfields this August Bank Holiday for one of the biggest events in the dance music calendar,...

Music Sagar Deshmukh - August 3, 2020
0
Many things we love the most aren’t that good for us. However, music is one definite exception to that rule. Everyone has THAT one...
ABOUT US
What started as an interest, slowly turned into a passion, and before we knew it, we had curated and founded a thriving community of avid electronic dance music lovers.
FOLLOW US
© Copyright 2020 - T.H.E Music Essentials