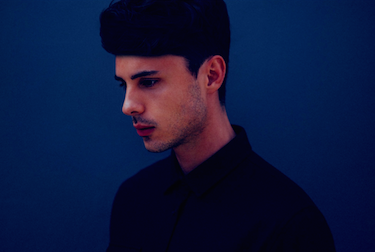 Golden represents the first single from his debut EP Golden Youth, which will be released later this year. The initial delicacy of keys enhances the power in Hoodlem’s vocals, evoking raw emotion throughout the track. The song perfectly encapsulates a combination of trip hop and warm synths that create a futuristic vibe. SAINT WKNDs progressive development of production, intertwined with the beautifully composed lyrics uplifts the mood of the track, whilst making it irresistibly catchy.

SAINT WKND is 22-year-old Munich resident, who has built up an impressive following online after a series of bootlegs and official remixes for Australian future-beat boss Chet Faker, indie group Saint Motel as well as Chicago based Louis The Child among others.

With over 25 million plays across his tracks on SoundCloud, SAINT WKND doesn’t plan on slowing down his rapid ascent any time soon.

Speaking of his inspiration behind the track, he explains: I woke up at 2am and had an urgent feeling to make music. I stared writing and finished the song by 8am. Goldens instrumental was done, but I wanted to add vocals to it. I knew about the indie group Hoodlem and luckily when I was on tour in Australia in 2016 I met them in Melbourne and we recorded the vocals in their home studio. Its a very honest song and I hope people will enjoy it.