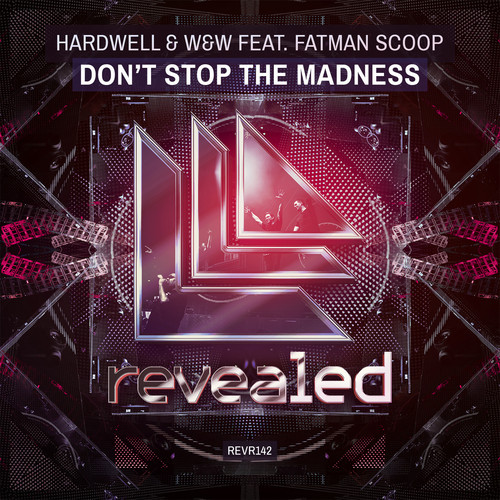 As an eagerness for Hardwell’s debut artist album – United We Are – continues to swell exponentially, the Revealed Recordings minister unveils his next release from the hotly-anticipated offering; ‘Don’t Stop The Madness’ with W&W and Fatman Scoop.

Creating a buzz across the scene after its live premiere at Tomorrowland back in 2013, greatness is something that can’t be rushed, as this epic collaboration is now finally readied to see the light of day. Joining together as a live force to be reckoned with, the legendary hip-hop hype man that needs no introduction, Fatman Scoop and familiar Revealed duo W&W, unleashed the vocal onslaught in-front of a sold-out Revealed label night at this year’s Amsterdam Dance Event.

Clocking-up live support from Avicii throughout his festival sets this Summer, not to mention across Hardwell’s extensive touring schedule over the past twelve months, ‘Don’t Stop The Madness’ has captivated crowds from The Netherlands to New York and back again.

Poised to be released as an extended mix exclusive to Beatport, by weaving together rhythmic electro-house punches and helium-high peaks, ‘Don’t Stop The Madness’ is a big-room attack that captures the live intensity of Hardwell’s arena-spanning shows, over-spilling with energy and certain to be an undisputed fan-favourite on United We Are.