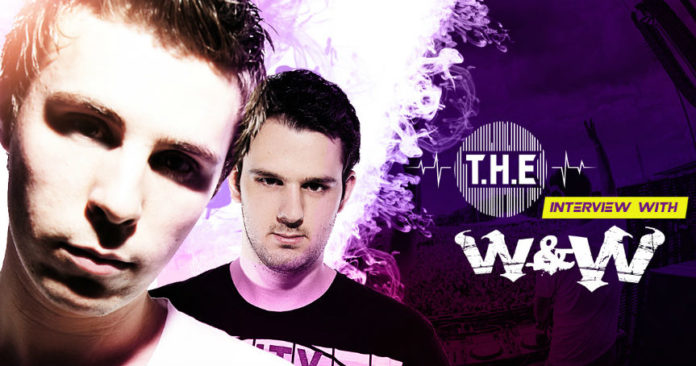 The leading power house and pioneer of dance music in India, Sunburn is celebrating the 50th episode of their iconic online radio show and a household name in the dance music industry – Sunburn On Air and that too with some electro-tinged festival rhythms!

India’s premier electronic music brand will for the very first time be presenting dance music’s monster radio on-ground event titled #SOA50 that will mark a milestone for the brand and will be broadcasted live across the globe via sunburn.in, uniting millions in every continent.

Hailing from Harlem in Netherlands, Willem van Hanegem & Ward van der Harstoften known by their popular stage name as W&W, are among those artists who transcended their own genre precincts and out did themselves in whatever rolled their way.

We had a chance to talk to them about a variety of topics including their views on “On Air” podcasts, their own Mainstage radio show, their thoughts on “Future House” and whether a W&W studio album is in the pipeline. Have a read. :)

T.H.E – Hello Guys! Firstly, let us start by telling you how excited we are about you Guys coming back to India. We would love to know what did you Guys love the most about India when you visited first time around.

W&W – It’s a pleasure to be back to this wonderful country. Performing in India is really amazing, it’s such a rapidly growing scene out here that it’s a treat every time we get here and see how everything’s developed!

T.H.E – This time around, you Guys will be visiting Hyderabad, Chennai and Pune. What are you looking forward to the most on your tour?

W&W – The EDM scene in the west is much more used to everything, so people tend to be a little less excited, really cool crowd nonetheless, but in India, the scene is rather untouched. That’s cool! It’s so cool to see people in India at the shows because like we said, they’re so excited. Maybe they’ve waited for months to go to the festival and now they’re finally there and they lose themselves in the music. It’s always an incredible crowd!

T.H.E – What are your views about the ‘Sunburn on Air’ podcasts, that’s gained a lot of popularity since its inception?

W&W – We think it’s a great platform to share your music. On Air podcasts are gaining a lot of popularity the world over and we feel it’s a very novel way to stay in touch with the music being produced the world over.

T.H.E – Talking about podcasts, when and how did you’ll decide to start the Mainstage Podcast? Do you’ll envision a grand celebration like ASOT when it reaches 500 episodes?

W&W – Our Mainstage Radio Show is our way to share our favorite music with the rest of the world on a weekly basis! We try to blend the best of multiple genres into a one hour mix. It’s great to see so many people from all over the world tuning in! A celebration when we reach 500 episodes is something which people will have to wait and watch. Haha..

T.H.E – How good is it for the electronic music industry that artists like Usher, Ed Sheeran and Justin Beiber among others have started working with dance music artists? Will the commercial importance benefit or harm the dance music industry, according to you?

W&W – When it comes to music and house music we’re pretty open-minded. We like all kinds of different styles and we try to experiment with different genres. We feel it’s a pleasant change that these artists have started collaborating with dance music artists.

T.H.E – What is your take on the emerging sound called “Future House”? Can we expect a W&W future house track anytime soon?

W&W – Like we said, When it comes to music and house music we’re pretty open-minded. We like all kinds of different styles and we try to experiment with different genres. If we feel like making or even playing something ‘Future House’ we will!

T.H.E – Which emerging artists have caught your eye recently?

W&W – It would be difficult to pick one since there are so many promising artists making it big.

W&W – We’ve got a lot of new cool projects coming in 2015. We’re not sure about an album but people will definitely be surprised by our new collaborations and other new W&W projects! We’ll see what happens!

T.H.E – Which has been your most memorable collaboration?

W&W – Pff, we’ve got so many amazing collabs! The one we did with Armin van Buuren, our first collab with Hardwell which we made in a hotelroom in Melbourne when we were touring Australia together. Also the track we did together with Dimitri Vegas & Like Mike was very special, especially since it was chosen as the Tomorrowland anthem of 2014.

T.H.E – India is the land of Bollywood. This might seem a bit funny but we really want to know whether you Guys will be interested in producing a track for a Bollywood film if you ever get the chance?

W&W – Bollywood is a pretty intriguing scene in itself. Unfortunately we aren’t aware of it, but we are always open to trying out new stuff. And would love to produce music for a bollywod film sometime.

T.H.E – Recently, a lot of Indian artists have been making headline news across the globe with artists like Sartek and Zaeden having their tracks played by the world #1 DJ, Hardwell. Are there any Indian artists who have caught your eye?

W&W – We love what Shaan is doing at the moment, he’s a really talented producer and also a great DJ! We play his track ‘Fire” in almost every set!!

T.H.E – Lastly, what message do you have for your fans who will be attending the #SOA050 celebration weekend with you?

W&W – We’re going to bring a ton of energy and loads of new bangers for you guys! We will make sure no one can stand still!

T.H.E – Thanks a ton Guys. This was fun. Hope you make the most of your time in India and all the very best in all your future endeavors. :)

If you still haven’t booked your tickets, we suggest you do so as this is one powerful gig which you can’t afford to miss. Click here to book.