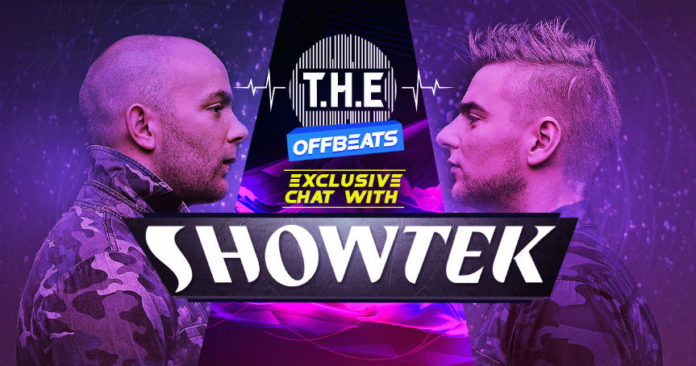 Brothers in blood and creative evolution, Showtek are the musical family that everyone wants a piece of.

Three megahits strong, countless production credits tapped and baring a label that dares to be different, Sjoerd and Wouter Janssen stand as a global vessel of exploration in the name of high-energy club music with universal appeal. Commercial success and technical respect aside, 2015 spells another landmark year for a duo whose leaps and bounds of the music industry have continued to keep aim at the next creative milestone in electronic dance music.

In our exclusive new series called T.H.E Offbeats which revolves around an exclusive chat with an artist about the current trending topics in EDM plus a few personal topics, the Showtek duo discuss their experience of playing at Tomorrowland Brasil, sibling rivalry, future album and if they weren’t DJs/Producers, what would their alternative career choices be! :)

T.H.E – You Guys recently played at the first ever edition of Tomorrowland Brasil. How was the experience? What would be your highlights from this event?

Showtek – Yes, it was insane! We were very excited to perform there and we had an amazing time backstage with the other artists as well. The crowd at Tomorrowland was so energetic and crazy, which makes it more fun to perform. Overall it was an awesome experience and it is hard to highlight just one thing.

T.H.E – How is the electronic music scene in 2015 different from what it was in 2001 when you’ll first started? What do you think was the turning point in the whole ‘EDM takeover’?

Showtek – Music is something that evolves, we try reinventing ourselves as producers and so do others. So it’s not weird that the EDM scene now is different than a few years back. We don’t think there was a real ‘EDM takeover’ it’s more that every now and then one particular style is more popular than other styles, but there is more than enough room for other genres as well!

T.H.E – We are sure fans across the globe would call your tune, “Cannonball” with Justin Prime as one of your biggest ever hits. How did the collaboration come about? Did you ever anticipate the success that has come with it?

Showtek – Justin’s track caught Tiesto’s attention back then. We met him and started talking about the track. We decided to join forces and it has definitely been a great collaboration! We did not really anticipate on this success no, because you never make a track to become a hit, we originally made it because we loved it so much. We definitely not expected it to get THIS big, but we even received a golden record in Holland and Belgium, which is absolutely insane.

T.H.E – Recently, you Guys made an edit of “Move” by Twoloud which received a great response. The whole world wants to know who the mysterious ‘’twoloud” is. Can you give us a hint or something? :P

T.H.E – Can we ever expect you to go back to producing Techno or Hardstyle as you used to when you first started off?

Showtek – No, we are not considering on going back to our old sound, because we do not regret switching. It was important for us to re-invent our sound to really be able to please our own music taste. When you grow as a person it’s also possible that your taste in music starts to evolve, and that happened with us. In the beginning we had some haters, but also gained new fans and some of our old fans loved the EDM scene as well. It’s important to stay true to your music. We get inspiration from a lot of different music genres, so maybe in the future we’re switching again to a different style, who knows what’s going to happen.

T.H.E – Has sibling rivalry ever played a part between you two especially during production?

Showtek – No not really a rivalry, but we are still brothers so of course we butt heads sometimes and we bicker. But we are both very different, and Wouter really has a lot of knowledge about music and he also is a good producer. I (Sjoerd) on the other hand am usually more seen as the entertainer. So this actually is a good combination. Besides that it is just really awesome to experience all this together with your brother, and we have a lot of fun while being on the road.

T.H.E – If you guys weren’t producers, what would your alternative career choice be?

Showtek – That’s a tough one…. Because we have always been so passionate about music and it is what keeps us motivated, so when thinking about an alternative career choice it would be something in the music industry as well, but on the other side maybe.

T.H.E – Any chance of an album anytime soon?

Showtek – We have a lot of cool stuff planned for 2015, but you’ll just have to wait and and be surprised! ;)

Showtek – First of all, we believe that Martin Garrix is really killing it right now, so definitely him. Also, Quintino is one to watch, he released ‘Winner’ on our label and the track did very well. Lastly I would say Oliver Heldens and Tiesto for sure! Oh, we named 4 artists…. Sorry:p.

Showtek – Spinnin’ Records is still a major label and the already released some great tracks this year! Musical Freedom from Tiesto is also going strong and of course our own label Skink! We have some really cool releases coming up, so stay tuned!

T.H.E – What’s next in terms of music and touring?

Showtek – We have quite some busy months coming up with touring. In May we will be touring in America and also our home country The Netherlands. And we will release a new track soon so we have some exciting weeks ahead of us.

What do you think of our chat? Do let us know by posting in the comments’ section below! :)