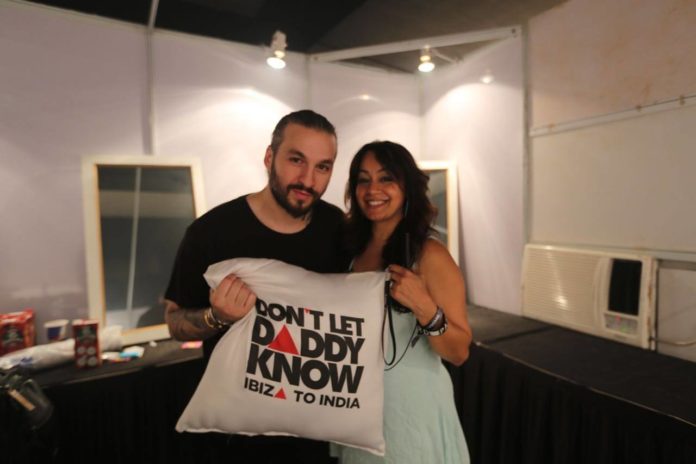 The grand launch of the Indian edition of the world’s biggest part, Don’t Let Daddy Know, brought to the country by Ferriswheel Entertainment, featuring the former Swedish House Mafia member Steve Angello and support acts like Sem Vox, Third Party, Sunnery James, Ryan Marciano, Anish Sood and NKHL dishing out their unique brand of dance music, was one hell of a banger scene over the weekend.

Top of the line visuals, and glamorous production were at the pinnacle in DLDK India. About four years back, Don’t Let Daddy Know started in Ibiza and it has since become a phenomena in Europe ever since. The India debut was held at NSCI Dome with an attendance of more than 10,000 fans.

Dating back to 2012, DLDK made it’s debut in Ibiza, with a staggering turnout and a star studded lineup. Having built a solid reputation over the years, the brand grew to dizzying heights with a number of successful editions all around the world. India has been privy to a host of global dance music IPs over the past 3 years with a number of heavyweight brands bringing their signature properties to the subcontinent. DLDK, primarily a house music dominant event, has hosted some of the biggest artists in the game and has always been a major influence for artists to perform here.

Shubhra Bharadwaj, Founder, Ferriswheel Entertainment said, “We have made history by reaching out to millions of fans across the globe with DLDK India. People went into a frenzy with Steve, Arty, Third Party and Sem Vox performing on stage. We had people coming in huge numbers and the reactions have been fantastic. People have loved the experience be it the the LED’s spread across 9 panels for an immersive experience, the pulsating wrist bands given to the audience free of cost as a take away merchandise, the state of the art technology or the massive production value ever seen in India before. Everything was in place from the operations to the que management to the bar handling. I am still getting messages from people asking me about the second edition already. A big shou tout to the partners of the event – Maruti Suzuki, Stoli, Budweiser, Bright hoardings, all online partners, our CSR partner MARD, VH1, Saavn and Jaegermeister, without whom the event wouldn’t have been a success. It’s truly incredible to be part of a family that is taking the world by storm and making dance music a household name.”

The tempo of the night was a blend of house, electro and techno making a perfect setting for the 10,000 fans who flocked NSCI Dome in the hope of being part of one of the most stellar event in the dance music fraternity.

NKHL and Anish Sood prepared the crowd for a perfect buildup to what was to come. Throwing down a bunch of house music classics and groovy tech house, the Indian mainstays definitely made a name for themselves with their style of artistry.

DLDK’s resident DJ and co-founder Sem Vox dropped his brand-new Don’t Let Daddy Know Official anthem ‘Mumbai’ and got fans mesmerised with his EDM rendition of Adele’s ‘Hello’. He was definitely on his A-Game laying down banger after banger with the crowd only reeling for more.

Russian record producer and DJ Arty blended different genres effortlessly, while maintaining the essence of his pedigree. UK based and Size Records mainstays Third Party brought house music alive in the best possible way, with emotionally charged melodies. With their recently released Lions In The Wild massive collaboration with Martin Garrix, the duo brought out all the stops for a ideal prelude for Size Records boss Steve Angello himself.

Former SHM member and one of the most revered names in the dance music scene, Steve Angello made his foray onto the decks while the fans went into a frenzy. Nothing short of an audio-visual spectacle, Angello’s set-list included remixed versions of popular DJs including Eric Prydz’s ‘Opus’ and Swedish House Mafia’s ‘Don’t You Worry Child’, ‘In My Mind’, ‘Leave The World Behind’, before ending the grand set with ‘We Are The Children Of The Wild’.

Dutch DJ/Producer duo, Sunnery James & Ryan Marciano proved to be yet another pair joining the ranks of the Dutch musical elite with their highly energetic closing set at the first ever edition of #DLDKINDIA!

All in all, the night was magnificent as DLDK India went down in history setting a milestone in the global dance music map. The event triumphed in all aspects with the crew at Ferriswheel Entertainment delivering a slick experience of what we’d like to imagine as a top-quality party with dance music superstars. We are eagerly looking forward to the next edition.