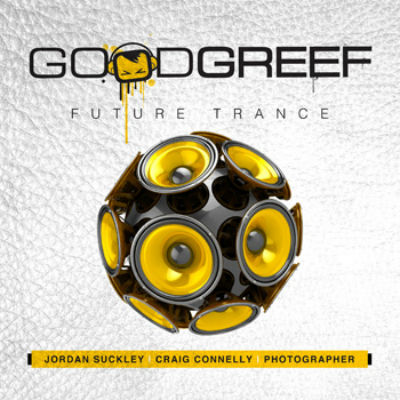 Goodgreef has always been in touch with the latest in the trance world and this time they’ve come out with a cutting-edge ‘Future Trance’ compilation. Goodgreef native Jordan Suckley, Craig Connelly and the recently emerged Photographer have delivered three distinct yet fabulous mixes.

Disc 1 features Jordan Suckley’s mix and kicks off with an intro edit of Elkser by DJ Ange. It gives a very techy feel and that continues with the next track ‘The Larger Picture’, before Jordan introduces his own monster tracks ‘Centipede’ and ‘Contaminated’. Also featured here is his powerful track ‘Access’. Irish supertalent Sneijder is also featured on the mix with his recent collaboration with Bryan Kearney called ‘Next Level’. Xgenic’s hard-hitting remix of Jordan’s track ‘Help’ is also featured in the later part of the mix. John O’Callaghan’s new track ‘One Special Particle’ is simply a stunning track which resulted in Jordan including it in his mix. An exclusive track in the mix is K-Narf’s ‘Dreams’, featuring Gracie and DJ T.H, which is a soulful uplifting track.

Jordan’s mix is a high energy mix that didn’t lose any tempo once it picked up – Which was pretty much from the second minute or so. Overall a great mix with a perfect blend of some exciting new tracks.

Craig Connelly kicks off his mix with a not-very trance track – Gareth Emery’s progressive beauty ‘Firebird’, which then heads into the brand new Stoneface and Terminal track ‘For You’ featuring the angelic vocals of Ellie Lawson. Tomas Heredia’s track ‘Behind Time’ comes up next and is on the lines of the progressive set-up of the initial two tracks. The legend Armin van Buuren can’t be left out of a trance mix can he? He shows up in his GAIA avatar with his recent track ‘Empire of Hearts’. Craig also puts in his own tracks ‘Decibel’ and his edit of the incredible Andy Moor track ‘Fade To Light’. Gareth Emery comes back into the mix towards the end, this time with the sublime Omnia remix of his Krewella collaboration ‘Lights and Thunder’. The serene Aly & Fila track ‘Speed of Sound’ is also featured on the mix. Craig has also included the the Mark Sixma and Jerome Isma-Ae collaboration ‘Refused’ in his mix.

From the onset it feels like a very ‘chill’ mix, and doesn’t hit you as hard as the powerful tracks in Jordan’s mix. Most of the tracks are pretty much progressive and this gives you a very distinct yet lovely mix, in contrast to the very powerful Jordan Suckley mix on Disc 1.

The 3rd and last disc is a mix by DJ Photograher, who goes straight to the bass with Gabriel and Dresden’s ‘Rise Up’, followed by the beautifully melodic ‘Touchdown’ by Cold Rush. ASOT 655 Future favourite ‘Refuge’ by Bobina is also featured on the mix and has a beautiful breakdown. ‘Route 66’ by 2nd Phase is an intense track with a speaker-shattering bassline and there’s even a beautiful melodic breakdown in the track. The massive uplifting ‘Rainbow’ by Startail is also featured on the mix. Photographer also puts in his remix of Binary Finary’s Trancelation and his remix of ‘Rocket’ by Abstract Vision.

Photographer’s mix is the shortest out of the three, yet he manages to be effective with his just-over an hour long mix, featuring some of the best uplifting tracks. The mix-comp is varied enough to have something for everyone, and all three mixes are really impressive. Kudos to all three DJ’s for putting up such great mixes. Goodgreef truly takes a step forward in trance with their ‘Future Trance’ mix-comp.

You can purchase the compilation here.