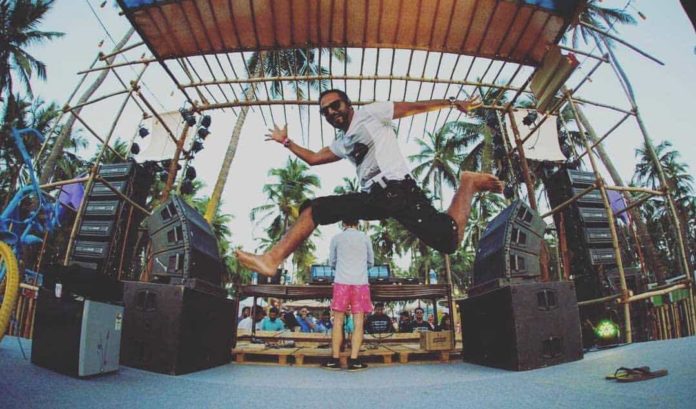 Nikhil Chinapa is one of the most passionate individuals this country has produced. From hosting massively successful shows, films and then Submerge, he has done it all. Nikhil Chinapa is all set for the fourth installment of Vh1 Supersonic and with the Ultra super line up well in place; we sat down with the man to learn a bit more following the colossal artist announcements.

Getting Eric Prydz to India

Eric Prydz headlining the festival is a massive testament to Nikhil and his efforts behind persuading him and his management to play in India. Eric Prydz has never headlined a festival in Asia and this will be his first ever appearance in India and as reiterated by Nikhil, it might not happen again. When asked how it all came through, Nikhil, as humble as ever said ‘The entire team has worked super hard to pull this off and we are extremely happy with the line-up and the bigger responsibility is to make sure the festival goes through in the best way possible’.

Read the story of how Nikhil Chinapa persuaded Eric Prydz to come to India.

Since its inception in 2013, Vh1 Supersonic has given the fans some monstrous line ups year in year out but we have to argue that this year’s line-up is by far the most balanced line-up the festival has delivered. While Eric Prydz, Macklemore and Zedd are set to draw huge crowds, the festival has also delivered immaculately with their Techno and Bass line up. Techno giant Joris Voorn is set to headline the massive Awakenings stage followed by Mini-tech master Boris Brejcha. International acts are well backed up by Indian acts in the form of Indian techno Pioneer Arjun Vagale and Qilla Records extraordinaire, Kohra, Browncoat and Ash Roy. The Bass line-up is equally exciting dropping some of the biggest names in industry. Breakage is set to make an appearance in the country along with Drum and Bass legend DJ Marky and wonky duo Dub Phizix and Strategy. ‘Basically I called a few friends and asked them if they could play. Some agreed while some didn’t due to time constraints but we managed to put together a festival in a span of 21 days’. The first edition in 2013 was put together by Nikhil and his team in 21 days. YES, 21 DAYS!! ‘I believe in surrounding myself with passionate people and I have a team which shares responsibility well and we managed to put together a festival’. The first edition of Vh1 Supersonic featured some heavyweights such as Above & Beyond, Benny Benassi, Ferry Corsten and Booka Shade. THERE!! Booking such massive names in the dance music industry along with other important formalities and setting up the right location, stages etc. within 21 days and finally making sure that the festival goes through in the smoothest manner possible. If you ask us, it’s unthinkable.

The festival is set to take place in Pune moving from Candolim, where it hosted its previous 3 editions.

‘I grew up Bangalore and Bangalore has a very strong youth community with a lot of professionals, students and similarly Pune has a strong youth community with a lot of college going students and professionals. So, when you are young, there is appreciation to new stuff and newer forms of music and there’s diversification. Obviously, we miss the beach, the coconut trees and the sand but Pune is a great location and we can’t wait to get started’.

The line-up has already given the fans every reason to be hyped about. Along with the announcement of Eric Prydz, Supersonic followed up with another massive announcement in the form Macklemore and honestly we couldn’t have asked for a better entry for Hip-Hop in India. Speaking about diversifying the line-up, he said “Our idea is to diversify. We want to make Supersonic a multi-disciplinary festival. Lately, we have seen a rise of many genres in the country and clubbing culture is at its peak which has seen more appreciation to different genres.” The festival is also set to put up reggae and dub sound system in the beer garden. Seriously, what else do you want as a dance music enthusiast? ‘It all started with our aversion to Kaliyon ka Chaman in 2003. Back then, even mainstream electronic music was underground for the masses as it was unexplored but you now can see more appreciation towards multiple genres and clubs are promoting different genres of music on different night’ said Nikhil when asked about the rise of Techno in India. Back when Submerge started clubbing nights on Thursdays, there were few ground rules. ‘’The first was requests were not allowed. The DJ was an artist and just like you would not tell MF Husain what to paint, you couldn’t tell the DJ what to play. If you didn’t like the music you could always go to another club. The second rule was we encouraged the DJ not to use the mic and rather let the music do the talking.”

Pioneers like Pearl have been exploring the deeper, darker side of electronic music for well over a decade now. Ash Roy and Arjun Vagale too have been pushing this alternative side of electronic music with their respective record labels. The multi-talented Kohra who has racked up Qilla Records back in 2009 to promote upcoming, diverse and cutting-edge dance music from India and across the world. “Nawed Khan AKA Browncoat and Tuhin Mehta have been doing rounds for years. Supersonic hosted the legendary Awakenings stage in their last edition which featured some of the biggest names in Techno scene.” Speaking about this year’s line-up, he said ‘This year’s line-up will be slightly different. Our idea is to feature upcoming Indian artists alongside International artists and try to collaborate. We can’t force collaborations but we’re hoping it happens when Indian artists meet their international counterparts.” Nikhil also reserved special praise for Ash Roy, Arjun Vagale and Blot! ‘Ash Roy is generally a very quiet personality but he has done shows in dozens countries around the world’. Ash Roy also has his own label called as Soupherb Records and the aim of the label is to provide a platform for forward thinking and Experimental music producers in the genres of Techno, Minimal, House and all the sub genres that go with it. Techno is arguably one of the most leading genres in the country we hope that the unparalleled rise of the genre continues to grow in the years to come.

Expanding Supersonic as a festival

‘Like I said, the idea is to diversify. Our vision is to grow and transform the festival into a multi-disciplinary festival and not just restrict the festival to electronic music or even just music. We want to maintain a balance in all aspects of our festival. The Supercrew is by far the most passionate and hardworking crews and festival’s success speaks for itself.’ Supersonic is in its fourth year and there is absolutely no turning back. The festival has seen relentless growth and because of their diverse line-up every year, Supersonic has given the fans every reason to travel and experience the spectacle and take Super moments back home.

If you haven’t booked your tickets yet, we really don’t know what are you waiting for. You can get more details about the festival here.