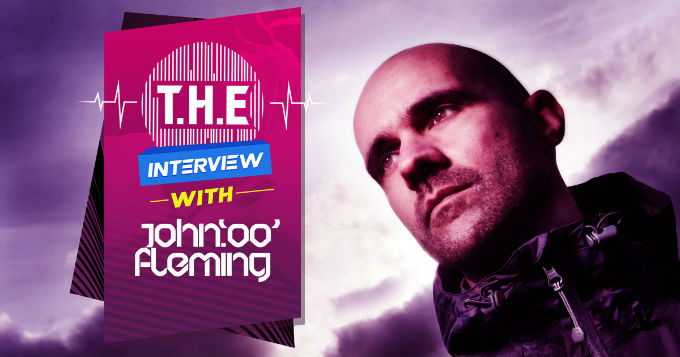 John 00 Fleming is an artist who has achieved international success in a career spanning over 20 years without dishonoring his musical essence or fans.

With over 10 million album sales and 30 produced mix compilations, John’s a proven musical pioneer whose essence lies in what his fans call, ‘the J00F sound’. The J00F sound is as unpretentious as the artist, and is best described as deep and textured progressively edged trance, in an electronic dance music style that is an antithesis to what is normally produced within the genre.

In April last year the first ‘J00F Editions’ caused less a ripple, more a seismic swell to pass across the electronic music pond. It rubbished the standard mix-comp rubric and ported a DJ’s genuine in-club experience like few before it.

We had a chance to talk to John about the ‘J00F’ sound and his famed ‘J00F Editions’ compilations. Read on to know what he had to say!

T.H.E – Hi John, firstly thank you so much for this opportunity.

T.H.E – The first ever version of “J00F editions” was monumental to say the least. How is “J00F Editions 2” different (apart from the track list of course).

John – There’s an old saying, ‘if it ain’t broken don’t fix it’. That’s the approach I’ve taken since my mixing my first compilation 20 years ago. I’m not adding popular tracks so that the mix becomes more commercially viable, , I stay honest and true to myself musically so that the fans get the true John 00 Fleming experience that they hear in a club.

T.H.E – Your ability to command a crowd is indeed spectacular, the music flows through your system and you feel every beat. Where do you find the inspiration to continue to create such alluring music?

John – As cliché as it sounds, I love music. I love hunting for obscure tracks, those hidden gems buried deep down inside shops, they become my hidden treasure that I play at clubs. It’s important for me to keep moving forward musically and looking at the future.

T.H.E – The compilation features tracks across progressive, tribal, deep, Psy, Goa & melodic trance. Is this an indication of the sounds you seem to enjoy the most.

John – My fans call this ‘the JOOF sound’. I have no genre rules, I just play music that I believe in that has my trademark hypnotic feeling.

T.H.E – Aside from “bringing the club experience to their living rooms”, is there anything else you want your listeners to feel when they hear this album?

John – I feel listening to a good album should be like watching a good movie that captures you, those movies that have you on the edge of your seat where you have no idea whats coming next as it take twist and turns, knocks you left, right, up and down.

John – To me a track is a tool for the job, regardless of who made it. As long as it passes the quality control of my ears and taste it will get used. I’m looking for certain vibes, energy levels to enable me to express that musical story.

T.H.E – Within the dance music community, the sounds are dynamic, there are a vast number of talented individuals, each with their own unique style to add. With all of this, have you ever felt any pressure change your own style?

John – I’ve never changed my sound. I get attracted to music that has a hypnotic feel, this once used to be called Trance. I think today the genres around me a changing their meanings, so not exactly sure where I sit in the next generations perception of genres?

T.H.E – We would like you to share your thoughts on this quote we came across – “There is no underground without mainstream”.

John – That’s the wonderful organic cycles of the music industry. Once something gets popular and mainstream, you’ll get a group of people rebelling to create something new.

T.H.E – Are there any up and coming producers you would like to call out who are doing really well?

John – Go support people like; Façade, Satinka, Simon Templar and many others!

T.H.E – Finally, your top 5 essential tunes of the moment.

T.H.E – Thanks a ton John for taking the time out for this interview. Wish you the very best with all your future endeavours. 🙂

If you still haven’t grabbed your copy of ‘J00F Editions 2’, grab it here.