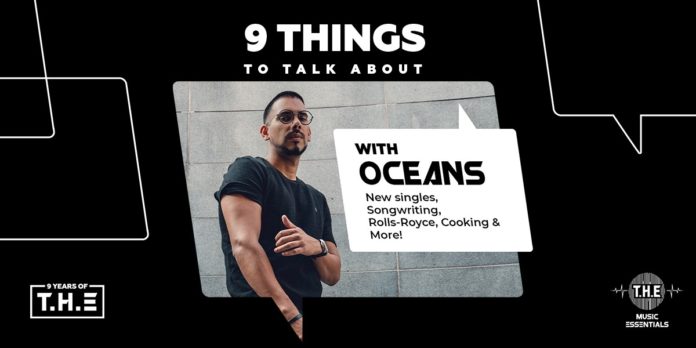 To celebrate our 9th birthday, we caught up with OCEANS to discuss 9 topics, including his new single – Rollercoaster, his favourite fashion brands and more.

T.H.E – Hey Oceans! Welcome to T.H.E – Music Essentials. You just released your first single of 2021, “Rollercoaster”. How did it come about?

OCEANS – Hey! ‘Rollercoaster’ has a very interesting story and was written during the lockdown in our CPH spot around this time last year. Myself and my partner, Alexandra, were stuck between apartments waiting on deals to come through and so much had been pushed back or cancelled for us because of this pandemic.

We ended up renting a room in a friends place short term. Roughly a month into our stay the building had to be fixed up and we ended up without a bathroom inside the house for like a month! They had to put the building work on hold so we would have to go outside in the cold and my girlfriend was losing her mind. On top of that the building drama and issues with all of the ongoing financials were becoming tough.

Nothing was moving. I was in the studio as much as possible trying to get work. So we faced a pretty hard time! We were trying to keep it together and we slowly pulled through. We signed the deal we were waiting for later in the year and moved to a lovely new spot of our own and ‘Rollercoaster’ is based on these highs and lows we have to face on our journey as a couple. Of course we’ve had many good times and adventures but we also must face the lows together and that is how ‘Rollercoaster’ was born as a song.

T.H.E – COVID has been a cause of discomfort for many artists, not just in music. How have you managed to stay productive in the lockdown?

OCEANS – I figured making ‘Rollercoaster’, ‘Cereal’ and ‘Unhappy Birthday’ and creating a label to release them was my main focus and as well as working on a new home studio and songwriting for other artists I’ve somehow kept the creative output up and I’m looking forward to traveling again to write and produce more with my co-artists!  Lockdown wasn’t that bad, it was just the energy in the house and the boredom sometimes that messed up the party. You have to push yourself hardest when times are tough and not get lazy!

T.H.E – What would you say have been the 3 biggest successes in your career so far?

OCEANS – So far, I’d say “Cold Ain’t For Me” as my first musical success, streaming over 50 million. ‘Cereal’ because it was the first release on my own label and it really sparked a new creative and artistic chapter for me. Finally, my long-lasting lifestyle partnership with Rolls-Royce as a brand. They have supported numerous adventures of mine and they are a really awesome company that I’m looking forward to sharing more visuals with. They supported me with a Black Badge Cullinan to shoot ‘Cereal’ with in the Scottish Highlands and I’ve collected so many awesome and inspiring memories working with them.

T.H.E – In Music, whom would you say have been your biggest influences and why?

OCEANS – Dr. Dre, Timbaland, Mark Ronson and David Guetta. There is a mutual reason for these people being my biggest influences and that is the fact that they are all brands in their own classes. They are each able to seamlessly express their creativity via different vehicles, genres, channels and artists. They have all managed to successfully deliver different styles of music whilst keeping an individual identity and style and always moved with the times. They have produced, written and performed as artists and they have all embarked upon awesome business ventures thanks to their music and communication to the world as artists. That for me is inspiring and I stand by what I always say, that music is not enough these days. Everyone is a producer, writer or artist. I’m focused on building a brand.

T.H.E – You’ve spent quite some time establishing yourself as a producer/writer. Why is that important to you and how does it relate to yourself as an artist?

OCEANS – I feel that at the core of music making is the writing and production. I want to be able to feature artists on my songs and collaborate with awesome talents. I feel that producing the record and styling the sound is longer lasting and I can move with the times if I follow that. If I can communicate with my fans in a way that lets them know I’m the producer and writer behind a large percentage of my music, I’m a happy guy! Instead of chasing the limelight and being on stage singing my songs, I’d rather be known for writing the lyrics and producing the sound. I’ve always wanted more for the fame to go to the person on the desk, the one playing the keys or the one creating the sounds. That to me is the magic of a record. Of course voices will always be key and talent is talent, but those who produce records should be just as identifiable as artists who sing them. The Adele’s, Sam Smiths and Celine Dion’s (my fave) of this world don’t need much production, they need a piano and they shine like diamonds! The vast majority however DO need dope tracks, amazing writing and A LOT of vocal production to make their records awesome.

T.H.E – Outside of music, you have also collaborated with brands like Rolls Royce etc. How did they come about, and what do they represent to you?

OCEANS – Oh, was just talking about them above! Brands like Rolls-Royce can sometimes be misunderstood. They have that mass attention in the rap and lifestyle world because they are expensive and ghetto fabulous, which is cool for sure but really, Rolls-Royce is much more that that. One of the worlds most interesting and fascinating brands under it’s skin, RR strive for greatness in every little thing they do. They have a certain attention to detail and a passion that is unimaginable unless you’ve spent many hours in their cars. I’ve had the pleasure of doing many lifestyle journeys in all of their models and I am just in love with that marque and everything they stand for. I always loved cars and have worked as an automotive journalist for years as a hobby, exploring my love for cars, performance driving and lifestyle adventuring. I’m slowly starting to bring that world to my music because Oceans is ALL about lifestyle and travel, creating memories. There is no better brand to do that with than Rolls-Royce so I hope we do much more! They support adventurers and their cars are made for the job.

T.H.E – What are your favourite hobbies outside of music?

T.H.E – Which are your favourite fashion brands, and why?

OCEANS – I dress fairly simple, but there are always staple brands that I wear. On my feet, I mainly wear Retro Jordan sneakers or Timberland Boots, why, because they are both brands I support the vision of, the performance of and of course the people behind them! Micheal Jordan has always been a huge influence in my life, and my only job ever was 12 months in Foot Locker in Bluewater when I was like 18. I spent every penny I earned in the store! Timberland 6” boots I buy once every two years to this day and they just rock man, I don’t know how to put it. Since I was a kid I loved Timberlands.

Moving up, I wear Zara Jeans in black. On Rotation. No issues. All Saints upper body usually because I love their fit and material, especially their brushed cotton T’s. You’ll also often catch me in one of my two BODASKINS leather jackets. Fine company from Manchester making what I think are the dopest leather jackets out there.

OCEANS – A lot of music, more visuals and some features on my songs. I need help though, if you are reading this and are a fan, I need your support now more than ever. This game is hard and working all hours in the studio to make these records is all I do. I want to give so much, but I need ears. Hope to catch you on my social media or in my inbox! Hit me up!